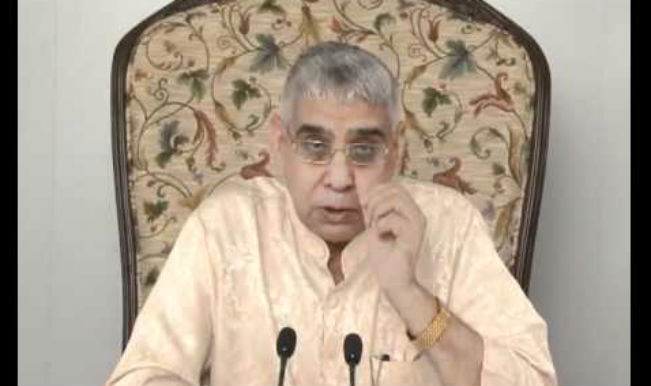 The high court had issued fresh non-bailable warrants against him. Rampal, who has been avoiding appearing before the high court on medical grounds, was seen walking out of the ambulance, which brought him from the Barwala Ashram, over 210 km from here, on his own. Also Read - Watch: 8-Foot Long Python Found in Car in Hisar Market, Rescued by Forest Department

He was brought to Panchkula under heavy police protection. “We have examined him and his condition, including his blood pressure, is stable,” B.K. Bansal, a doctor at Panchkula’s Sector 6 General Hospital, told media. Haryana Police finally arrested the elusive self-styled godman Rampal Wednesday evening from his fortified Satlok Ashram near Barwala.

At least six people lost their lives in the stand-off as Rampal eluded the police, while many of his key aides and around 450 supporters were also arrested. After his arrest, Rampal was whisked away in an ambulance by the police from the ashram. The deaths of five women and an infant occurred during a stand-off and violent clashes between the controversial sect leader’s followers and the security forces.

Senior police officers, and Central Reserve Police Force (CRPF) and Haryana Police personnel entered the ashram complex Wednesday evening and Rampal was arrested around 9.15 p.m. Rampal has been slapped with fresh cases of sedition, attempt to murder, rioting and illegal detention. Nearly 14,000 sect followers came out of the ashram Wednesday even as Rampal continued to evade arrest.

Supporters of Rampal Tuesday clashed with security forces to prevent them from entering the ashram premises.  The area around the ashram resembled a battlefield as sect supporters resisted police action. Sect followers fired at police, lobbed petrol bombs and acid pouches, besides hurling stones and bricks outside the ashram, clearly indicating that the sect was well prepared to resist the security forces.

The sect leader has been avoiding arrest and failed to appear before the Punjab and Haryana high court although non-bailable warrants were issued against him Nov 5. Rampal’s supporters had indulged in vandalism in a court in Hisar in July when he was going there in connection with a 2006 murder case.

The high court took suo motu notice of the incident and had summoned Rampal.