New Delhi: Asha Devi, the mother of the victim in the 2012 Delhi gang-rape and murder case, on Monday remarked that the ‘repeated postponing of the execution of the four death case convicts shows the failure of our system’ after a Delhi court ordered, until further orders, a stay on the convicts’ execution, scheduled for 6 AM on Tuesday. Also Read - Nirbhaya Case: Execution of Four Convicts Delayed Till Further Orders, Says Delhi Court

Delhi’s Patiala House Court ordered a stay on the execution after Pawan Gupta, one of the four death row convicts, filed a mercy petition before President Ram Nath Kovind. According to rules, a death-row convict can be executed only 14 days after his mercy petition is rejected by the President. Also Read - Delhi Court Refuses to Stay Nirbhaya Convicts' Execution Tomorrow; Pawan Gupta's Counsel Files Another Mercy Petition

Reacting to the development, Asha Devi, who has become the face of the movement to get justice for her daughter, dubbed Nirbhaya (fearless), said, “Why is the court taking so much time to execute its own order to hang the convicts? Repeated postponing of the execution shows the failure of our system.” Also Read - Nirbhaya Case: March 3 Hanging on Track as SC Junks Curative Plea of Pawan Gupta

“Our entire system supports the criminals,” she added. 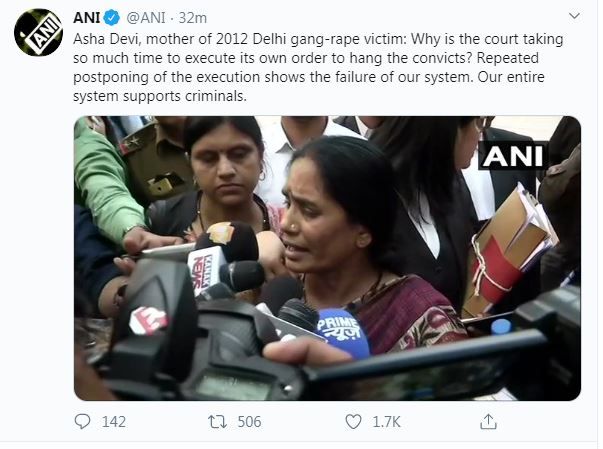 However, Badrinath Singh, Nirbhaya’s father was more optimistic, remarking that ‘the procedure is what it is,’ adding that the next date of execution would turn out to be final as the convicts had exercised all their legal options. He, however, accused AP Singh, the convicts’ lawyer, of misleading the court.

Incidentally, earlier in the day, the Patiala House Court itself had rejected a petition seeking a delay in execution, almost immediately after the Supreme Court dismissed a curative petition filed by Pawan, in which he urged that his death sentence be commuted to life term.

Notably, Pawan is the last of the four death row convicts to have filed the curative petition and mercy plea.

This is the third time their execution has been delayed. The two earlier dates on which the execution was to take place, but was deferred due to a strategic filing of mercy and curative pleas by the convicts, were January 22 and February 1.