New Delhi, Jan 26: The strength of the India’s military, the talent of the country’s industry and the diversity of the nation’s culture was at display at Rajpath in the national capital as the country celebrated its 68th Republic Day. In the presence of President Pranab Mukherjee, Prime Minister Narendra Modi, chief guest UAE Crown Prince Sheikh Mohammed bin Zayed Al Nahyan and thousands of countrymen as well as nationals of other countries, the Republic Day Parade saw armed forces contingent, cultures of different states and performances by school children brighten up Rajpath. Also Read - CISF Issues Clarification Over Cooch Behar Firing, Says Mob of 150 Attacked Troops, Action In Self Defence

This year the Republic Day parade saw colourful tableaux from 17 states and six ministries, displaying not just culture, but also the resources and talent that India bestows. The UAE armed forces contingent marched through the Republic Day parade for the first time ever. A UAE delegation was also present amidst the spectators at Rajpath to witness India’s show of strength. (Also Read: Republic Day Parade 2017: As it happened) Also Read - 'Glad They Are Taking My Clubhouse Chat Seriously', Prashant Kishor Reacts to Audio Clip Released by BJP 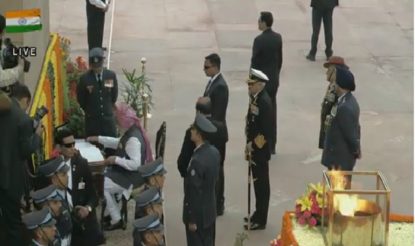 The parade began with Prime Minister Narendra Modi, dressed in a white kurta pyjama, a Nehru jacket and a pink pagdi, receiving a roaring welcome as crowds cheered him. He paid his tribute to martyrs at the Amar Jawan Jyoti. He then wrote his message in the ceremonial book at the Amar Jawan Jyoti, following which he received Vice President Hamid Ansari and his wife, President Pranab Mukherjee and UAE Crown Prince Sheikh Mohammed bin Zayed Al Nahyan. The three leaders then greeted Army Chief General Bipin Rawat, Chief of Naval Staff Admiral Sunil Lamba and Air Chief Marshal Birender Singh Dhanoa.

The leaders then proceeded towards the spectators’ box and the Rajpath rose for the National Anthem amidst 21 gun salutes.

Havildar Hangpan Dada was awarded the bravery award, Ashok Chakra, posthumously, for fighting terrorists bravely. On May 26, 2016, Hangpan Dada spotted the movement of a few terrorists in Northern Kashmir. He bravely engaged in an encounter and gunned down three terrorists despite being severely injured and ultimately sacrificing his life for the nation. The fourth terrorist present in the area was also killed by security forces.

Hangpan Dada’s wife Chasen Lowang Dada was in tears when she received the honour from President Pranab Mukherjee on Thursday at Rajpath. 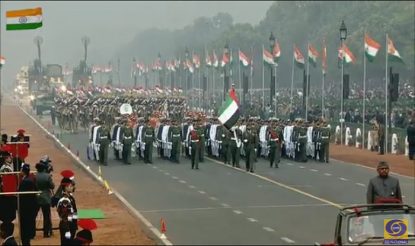 The UAE armed forces contingent also marched at India’s Republic Day parade for the first time. A 149-member UAE Presidential Guard, the Air Force, the Navy and Army contingent led by a UAE band consisting of 35 musicians marched on Rajpath, presenting a ceremonial salute to the President of India. The UAE military contingent was led by Lt Col Abood Musabeh Abood Musabeh Alghfeli.

The military weapons that India boasts of included Infantry Combat Vehicle BMP 2K, Brahmos WPN System, Weapon Locating Radar (Swathi) among many more. The defence machinery on display was a reflection on India’s military might.

The armed forces contingent marching at Rajpath in perfect co-ordination included the Bihar Regiment, the Punjab and Sikh Regiment and the Gorkha Regiment among others . The tableaux of Army Veterans and Indian Air Force displayed India’s grit to the world. Indian Navy’s Tableau was themed ‘Indian Navy – Professional Force-Anchoring Stability, Security and National Prosperity’.

For the first time, a contingent of the National Security Guard (NSG) popularly known as the Black Cat Commandoes was also part of the march-past at Rajpath. 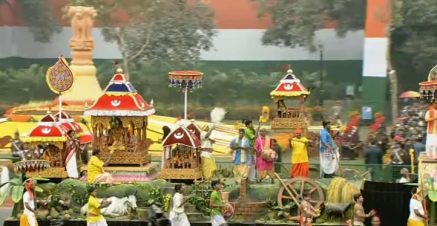 This year the Republic Day parade saw colourful and tableaux from 17 states and six ministries of the Central government. The first state tableau that made its way was that of Odisha’s, themed around the bhakti culture tradition of ‘Dola jatra’. This was followed by the tableaux from Arunachala Pradesh, Maharashtra and Manipur.

The tableau from Gujarat was accompanied by a dandiya and garbha performance, followed by the Delhi tableau, which made its way to the parade after three years of rejection. The Haryana tableau was themed around the campaign ‘Beti bachao, beti padhao’, and was followed the tableau of West Bengal. The tableau of Punjab was themed ‘jaggo aaiya’, which is a ceremonial function performed in the weddings across the state.

The colourful and musical tableaux of Tamil Nadu and Gujarat brought joy at Rajpath. The Jammu and Kashmir tableau was white, displaying the beautiful snow-covered mountains of the state. (Also Read: All about the tableaux from this year’s Republic Day Parade)

These were followed by the tableaux of ministries including Ministry of Housing and Urban Poverty Alleviation, Central Board of Excise and Customs and Ministry of Micro, Small & Medium Enterprises, displaying India’s flagship programs.

These were followed by cultural performances by students of four schools.

Concluding with the motorcycle daredevils and fly past 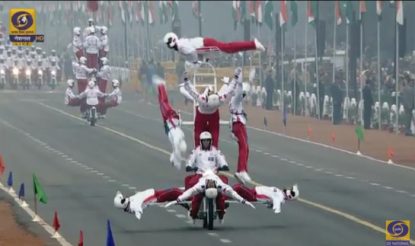 The splendid driving skills of Dare Devils – the motorcycle display team of Corps of Military Police displayed the balance and the strength these men carry. They made formations of Ladder, Double Bar, Lotus, Christmas Tree, Aircraft, Sudarshan Chakra, Flower Pot, Pyramid and Wheeling on moving motorcycles. 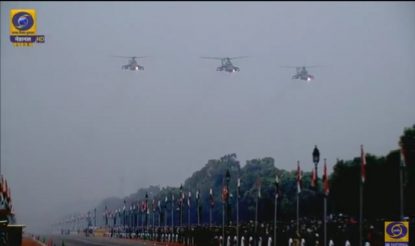 The fly-past at Rajpath

Post this, the action moved from the ground to the skies. The fly past began with the ‘Chakra’ formation by three Mi-35 helicopters in ‘Vic’ formation, followed by the ‘Hercules’ formation by three C-130J Super Hercules aircraft in ‘Vic’ formation. Then came the ‘Netra’, an Airborne Early Warning and Control System Aircraft, also known as ‘Eye in the Sky’. This was followed by the ‘Globe formation’ comprising a C-17 Globemaster flanked by two Su-30 MKIs. This was followed by five Jaguars in Arrowhead formation, five MiG-29 Air Superiority Fighters in Fulcrum style. The ‘Trishul’ formation comprising three Su-30 MKIs of No. 24 Squadron gave goosebumps to spectators. The flypast concluded with a Su-30 MKI carrying out a ‘Vertical Charlie’ manoeuvre over the saluting dais.

The parade culminated with the national anthem and release of tricolour balloons into the sky.