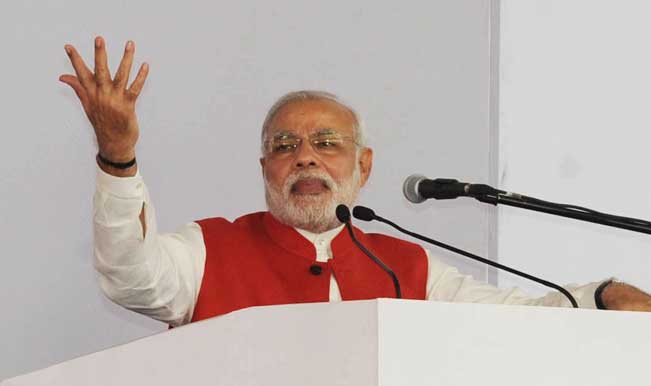 Washington, Sep 29: Prime Minister Narendra Modi‘s rock star like reception by a rapturous Indian-American community at Madison Square Garden made quite a splash in the US media too ahead of his summit Monday with President Barack Obama. Modi “sold himself on Sunday as a onetime tea vendor who wanted to lift India to glory by cleaning up the country, clearing the way for business and preparing its young citizens to be the work force of an aging world,” wrote the New York Times. Also Read - PM Modi Likely to Hold COVID-19 Review Meeting With Chief Ministers of 7 Worst-hit States Next Week

“His speech at Madison Square Garden telegraphed a wish list on the eve of his first meeting with President Obama, while also deftly rallying an influential diaspora to his side,” suggested the influential daily. “Modi is here to sell a new New India, with himself as the man who can be trusted to deliver on its promise,” noted the Times. Also Read - US SC Justice Ginsburg Dies Setting up Pre-poll Confrontation

But it also wondered “whether he is willing or able to bridge India’s wide differences with the United States on tax policy, climate change, outsourcing, intellectual property rights and other issues.” In a similar vein, The Washington Post suggested: “Modi will arrive in Washington Monday a hero to a majority of the region’s large and successful Indian American community.

“But he will also face protests from some Indian minority groups who call him a Hindu extremist and say he failed to control deadly religious riots a decade ago,” it said. At Sunday’s reception, “nearly 20,000 Indian Americans cheered Modi, with many saying his visit should enhance India’s roller-coaster relationship with the United States and put a fresh face on his once-tainted leadership,” the Post commented.

Disputes between India and US continue over trade and foreign policy, the daily said, citing the example of India’s stand over Ukraine, but noted “much of the Indian diaspora is eager to push the two countries even closer.India’s Prime Minister Modi thrills, angers in New York.” USA Today so headlined a story about how Modi “took on rock star status” at Sunday’s reception before he heads to the White House for meetings with Obama Monday and Tuesday.

“Modi, speaking in Hindi, used the rally that included members of Congress and other dignitaries to list what the world’s most populous democracy offers to the world and to point out common ground with the United States, the world’s first democracy,” it said. Several other publications carried an Associated Press story about how he “told a packed and boisterous crowd of (Indian-Americans) to help him develop his nation’s economy, vowing that under his leadership, India won’t look back.”

“A dazzling, Bollywood-style show with dancers warmed up the crowd before Modi appeared. About 30 US lawmakers attended – ringing the stage as the Indian leader came into the auditorium under a spotlight like a boxing champion,” the US news agency reported. And noting that Monday, Modi will meet Obama at the White House, AP commented: “Being courted by Washington marks a major change since 2005, when the US denied Modi a visa for his alleged complicity in sectarian violence in his home state of Gujarat.”