Thiruvananthapuram: The Sabarimala temple opened for the first time on Wednesday since the Supreme Court allowed women of menstrual age (10 to 50 years) to enter the shrine but violent protests and subsequent clashes stopped women of the “banned” age group from entering the hill-top temple. Also Read - Chhattisgarh News, May 18: Section 144 Imposed For 3 Months to Curb Spread of Coronavirus

Though older women and very young girls could be seen in the crowd, “no girl or woman in the age group of 10 and 50 has visited Sannidhanam (the temple complex) so far,” a senior official of the Travancore Devaswom Board (TDB), the body which manages the shrine, told PTI. Before the gates of the shrine, abode to Lord Ayyappa, opened at 5 PM for the monthly rituals, the base camp of Nilakkal witnessed clashes between police and thousands of protesters opposing the entry of women of all ages into the temple. Also Read - 'Avoid Coming to Sabarimala,' Urges Temple Board as More Coronavirus Cases Surface in Kerala

Protesters pelted police with stones and the latter hit back with vengeance wielding batons with telling effect, leaving many fallen and writhing in pain on the road. Several protesters were seen being bundled into police vehicles, while ambulances carried some to hospitals. Also Read - Delhi Police Imposes Section 144 in Shaheen Bagh as 'Precautionary Measure' Fearing Repeat of Communal Clash

Women journalists were heckled, their vehicles smashed and young women Ayyappa devotees turned back as hordes of Hindu right activists besieged the road leading to the hill-top temple. Activists of fringe groups heckled women journalists of at least four national TV channels and vandalised their vehicles.

National TV showed protesters wearing black and saffron turbans running after their cars, violently pounding and kicking the vehicles in a bid to stop them from proceeding to Pamba from Nilakkal on way to Sabarimala. At least 10 people from the media, including reporters and photojournalists, were injured and equipment of several damaged, senior minister E P Jayarajan said. 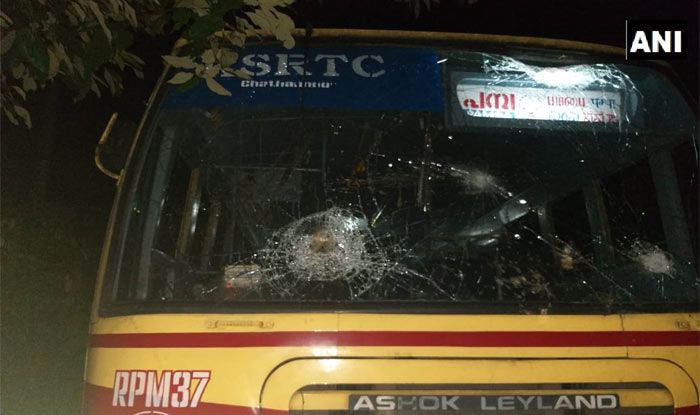 Bus carrying journalists among other passenger vandalised by protesters.

Denouncing the attacks on media, he said cases were being registered against the suspects under sections relating to non-bailable offences. Meanwhile, the state administration has imposed Section 144 in four areas close to the Sabarimala temple _ Nillakkal, Pamba, Sannidhanam and Elavumkal.

Pathanamthitta District Collector P B Nooh said that Section 144 will come into effect from Wednesday midnight for two days. However, the Collector made it clear that that there would be no obstruction to peaceful pilgrims, while no permission will be given for protests in the area.

The Home Ministry also took cognisance of the incidents of violence. The Network of Women in Media, India (NWMI) condemned the attack on women journalists and demanded strict action against the culprits, adding that it is the government’s responsibility to provide a “secure environment for journalists”.

The National Commission for Women (NCW) took cognisance of the matter and urged the Kerala Police to ensure security of women who wish to enter the Sabarimala temple and demanded stringent action against those taking the law into their hands.

‘Antharashtriya Hindu Parishad’ led by Pravin Togadia and the ‘Sabarimala Samrakshana Samithi’, an outfit of devotees, have called a 12-hour-long hartal starting 6 am. The BJP and its NDA partners have backed the 12-hour ‘hartal’ called by Sabarimkala Action Council to protest the police action against devotees. The Congress said it would not join the strike but hold protest demonstrations across the state on Thursday. 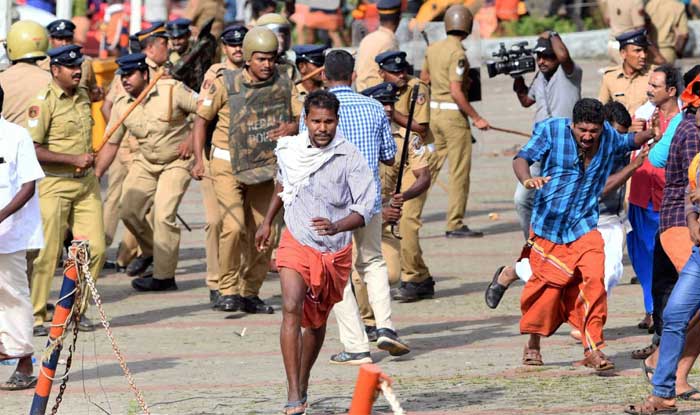 Police lathi-charge on the protestors after they opposed the entry of girls and women of menstrual age into the hill shrine of Lord Ayyappa Temple.

Special security arrangements and patrolling have been put in place in various locations including Pamba, Nilakkal, Erumeli, Vandiperiyar en route to the Sabarimala temple, located in the central district of Pathanamthitta.

DGP Lonknath Behera said 700 additional police personnel had already been deployed in Pamba and Nilakkal, the base camps of Sabarimala pilgrimage, to maintain law and order and ensure the safety of devotees proceeding to the temple.

Earlier in the day, unfazed by the unfolding violence, Madhavi, a woman from Andhra Pradesh, tried to climb the Sabarimala hills to reach the Lord Ayyappa temple but was forced to return to Pamba.

Liby, a woman from Kerala’s Alappuzha, also belonging to the “banned” age group, was prevented from proceeding to Sabarimala at Pathanamthitta bus terminal. She was escorted to safety by police. 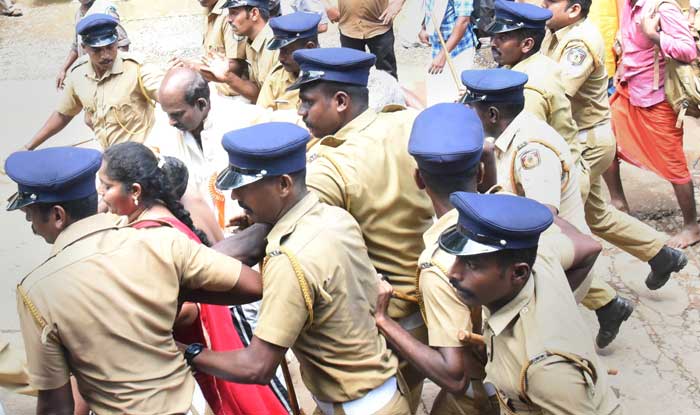 Police escort Madhavi (of Andhra Pradesh) and her family members after she was heckled by the protesters.

Both the Congress, the main Opposition party in Kerala, and the BJP, which is desperately seeking to expand its footprint in the state, have lent support to the agitation against the Supreme Court verdict.

Surendran, who reviewed the situation and preparations for the three-month-long Mandalam-Makaravilakku-festival beginning November 17 at Sannidhanam (Sabarimala temple complex), said the government would tackle the agitation politically.

“The BJP-RSS are trying to create tension and destroy the peaceful atmosphere in Kerala for political gain. We know the agenda of the RSS and BJP very well,” he said, and insisted the government did not want any confrontation with believers.

The BJP rejected the allegation, holding the government responsible for the “collapse” of law and order. Party leader and MP V Muraleedharan said the government should shed its stubbornness and respect the sentiments of the people of Kerala.

Congress leader Ramesh Chennithala blamed both the ruling CPI(M) and the BJP-RSS combine for violence.

The shrine will remain open for the five-day monthly pooja during the Malayalam month of Thulam before being closed on October 22.