Devotee bodies, right-wing outfits and various political parties have threatened with disruption, with some of them even warning of “mass suicides”.

Thiruvananthapuram: Tension continues to mount in Kerala as the Sabarimala Temple is set to open its doors on Wednesday for the monthly pooja – the first time since the Supreme Court allowed women of all age groups to enter the shrine. Also Read - 'Effective Steps Needed to Redeem Situation': SC Takes Suo Moto Cognisance of Migrants' Plight

Devotee bodies, right-wing outfits and various political parties have threatened with disruption, with some of them even warning of “mass suicides” against the Communist-led government’s move to implement the top court verdict. Also Read - SC Allows Air India to Resume Non-Scheduled International Flights With Middle-seat Bookings For Next 10 Days

While most of the organisations will hold peaceful protests, the Shiv Sena and the Ayyappa Dharma Sena said they will prevent women of the menstruating age group from entering the hill shrine. The Sena will reportedly send a seven-member suicide squad to Sabarimala to resist those daring to enter the temple defying its customs and traditions. Also Read - Plea Moved in Supreme Court to Ban Zoom App After Complaints on Privacy Breach, Security Issues

The unrest increased after the last-minute effort by the Travancore Devaswom Board (TDB) to resolve the vexed issue failed to reach a consensus on Tuesday. The Pandalam royal family and other stakeholders walked out of the meeting over the TDB’s reluctance to discuss the issue of filing a review petition against the apex court order. However, TDB, which manages over 1,200 temples in the state, including the Lord Ayyappa Temple, said talks with the stakeholders would continue to find a solution.

In an apparent climb down from its earlier stand that the Board was not ready for a review, the TDB indicated that the matter would be taken up at its meeting slated for October 19.

Tension prevailed at Nilakkal, the main gateway to Sabarimala in Kerala, on Tuesday where hundreds of women devotees checked vehicles for girl and women of menstrual age and stopped them from proceeding to the hill shrine.

There were also reports that members of the local tribal community were keeping a tight vigil to ensure that women between the ages of 10 to 50 (the typical duration of time when a woman menstruates) were not allowed to enter the Lord Ayyappa temple which is specifically dedicated to the celibate form of the deity.

Besides private vehicles, devotees even stopped and inspected Kerala State Road Transport Corporation (KSRTC) buses and asked young women to get off. Very few police personnel were present when the incidents happened. 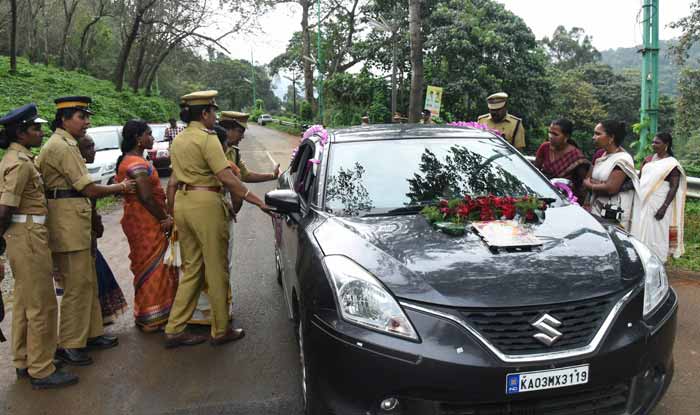 Women protesters check Sabarimala bound vehicles at Nilakkal to ensure that no women in the age group between 10 and 50 are going to Lord Ayyappa temple.

One of the woman agitators said, “No woman belonging to the banned age group of 10-50 will be allowed to travel further from Nilakkal and offer worship at the shrine” when it opens for the monthly pooja on Wednesday evening. The temple would be closed on October 22 after the five-day monthly pooja during the Malayalam month of Thulam.

Chanting ‘swamiya saranam Ayyappa’ mantras aloud and clapping their hands, women devotees had been inspecting vehicles at various points en route to Sabarimala since last evening. Local television channels reported that some college students, who were sporting black dresses, were asked to get out of their bus by devotees alleging that they were on their way to Sabarimala.

Ayyappa devotees wear black clothes and a bead chain during the pilgrimage. Women journalists who tried to reach the hill temple as part of their official assignments were also stopped at the base camp.

CM Assures Security to All, Warns Strict Action Against Obstructers

Chief Minister Pinarai Vijayan, however, warned of stern action against those who stop the devotees. “We will ensure security to all. Nobody will be allowed to take law into their hands. My government will not allow any violence in the name of Sabarimala,” he told reporters in Thiruvananthapuram.

Vijayan also made it clear that the government has no intention to file a review petition and would implement the apex court order. The Chief Minister said the government had taken a stand on the issue that there should not be any discrimination on the basis of gender.

However, the government has clarified that it would not bring in any law to put its policy into practice. “But, will go by what the Supreme Court says,” Vijayan said.

The TDB, meanwhile, covered a signboard at the base camp in Pamba that said the entry of women of menstrual age into the temple was prohibited.

The multi-lingual board reading “Women between 10-50 are not allowed to visit Sannidhanam (Sabarimala temple)” was covered in the evening with a plastic banner that said: “Use of plastic is prohibited here”.

Kerala has been witnessing intense protests including prayer marches and mass rallies by Lord Ayyappa devotees and right-wing outfits against the implementation of the apex court verdict.

On September 28, a five-judge Constitution bench, headed by then Chief Justice Dipak Misra, lifted the ban on the entry of women of menstrual age into the shrine.