BJP leader Sadhvi Prachi kicked up another controversy by calling for a boycott of films starring Bollywood stars Shah Rukh Khan, Aamir Khan and Salman Khan and asking right wing Hindu outfits to tear posters of their films and make a bonfire of them. 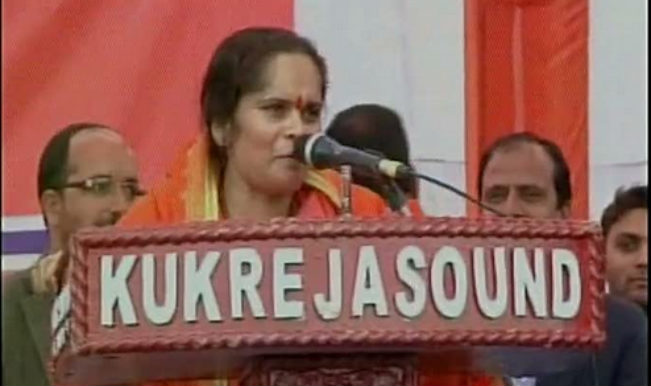 Dehradun, Mar 2: BJP leader Sadhvi Prachi kicked up another controversy by calling for a boycott of films starring Bollywood stars Shah Rukh Khan, Aamir Khan and Salman Khan and asking right wing Hindu outfits to tear posters of their films and make a bonfire of them. The Sadhvi also alleged that Christian proselytism was the motive behind Nobel Laureate Mother Teresa’s missionary work. She made the call for the boycott of the Khans while suggesting that their films are spreading a culture of violence and advising youngsters not to idolise them. Also Read - Amid 'Love Jihad' Law Roar, Muslim Man Converts Before Marrying a Hindu; Couple Under Haryana Police Protection

The controversial statement came despite Prime Minister Narendra Modi’s appeal to all religious groups to act with restraint and mutual respect and his assertion that his government will not allow any religious group from the majority or minority to incite hatred against others, covertly or overtly.Speaking at a programme of Vishwa Hindu Parishad here yesterday, the Sadhvi, known for stoking controversies by her statements, said once she had been to a programme in Meerut where she asked a young boy what he wanted to become in life. Also Read - Madhya Pradesh Govt In Process of Bringing Love Jihad Law: CM Shivraj Singh Chouhan

“He said he wanted to become like Hritik Roshan, Shahrukh Khan, Salman Khan, Aamir Khan. When I asked why, his mother told me because they are good at doing stunts,” she said. Suggesting that the Khans and their films are spreading a culture of violence, she asked the younger generation not to get fascinated by them and idolise them. Calling for a boycott of the Khan triumvirate’s films by the right wing Hindu outfits, she said, “I, for one, would ask the Bajrangis to tear the posters of films of Shahrukh Khan, Salman Khan and Aamir Khan of the walls and burn them in the fire of Holi.”

Sadhvi Prachi did not spare Mother Teresa during her fiery speech. “Mother Teresa indulged in conversion by luring people over to Christianity under the pretext of service,” she said. RSS chief Mohan Bhagwat had also made similar remarks while alleging that Christianity was the main objective behind Mother Teresa’s service to the poor. Sadhvi Prachi had earlier said that Hindu women should have four children as Muslims were “trapping our daughters through ‘love jihad'”.

She had also said, “The population of Hindus is on the decline. They must have more children to maintain a balance (between communities) in the country.”