#SaveChandni: Neck-deep in poverty Chandni Rajgaur from Vadodara puts herself up for sale on Facebook

Chandni Rajgaur takes to Facebook to sell her dignity online 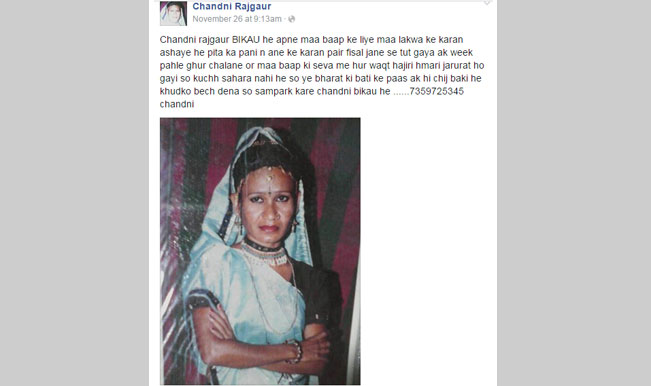 Neck-deep in poverty Chandni Rajgaur from Vadodara took to a very drastic step on social media to get over her suffering. Chandni Rajgaur took to her Facebook profile and tried to sell herself online. The woman seeked help through her body to get over poverty. With old ailing parents and she was left helpless. So she took to the social media and tried to sell her dignity online. Her mother has been paralyzed and her father is bedridden after suffering from an accident. With no one to seek help and no means to provide for the family she took the dire step to sell her dignity. Also Read - Trump Claims 'COVID-19 Less Lethal Than Flu'; Facebook, Twitter Swing to Action

Although even after taking this drastic step, she confessed that most of the people who contacted her tried not to help her but rather approached to exploit her. Not much is known about Chandni but her Facebook profile says that she studied at M.S University and works for the Bharatiya Janata Party.

But after this post was all over the internet the chairperson of Gujarat State Commission For Women, Lilaben Ankolia assured her that the civil hospitals in Gujarat will provide medical help for her parents and she can approach the commission for help.