An image of Head Constable Deepak Dahiya confronting 33-year-old Mohammad Shahrukh had gone viral on social media. Earlier there were reports that he had been arrested by the Delhi Police which later clarified that the man is currently absconding and is yet to be arrested.

New Delhi: Deepak Dahiya, the Delhi Police constable who bravely faced a rioter pointing a gun at him in northeast Delhi’s Maujpur on February 24, on Friday said that he distracted the gunman by showing him his stick, thus making him fire towards the opposite road.Also Read - Delhi Violence: Muslim Survivor Reveals Hindu Neighbour Saved Him From Rioters

The gunman was later identified as Mohammad Shahrukh. Earlier there were reports that he had been arrested by the Delhi Police which later clarified that the man is currently absconding and is yet to be arrested. Also Read - Opposition Lying on CAA, No One Will Lose Citizenship: Amit Shah's First Public Remark on Delhi Violence

“He got distracted and fired 1 round of bullets towards the opposite road and fled from there,” he added. 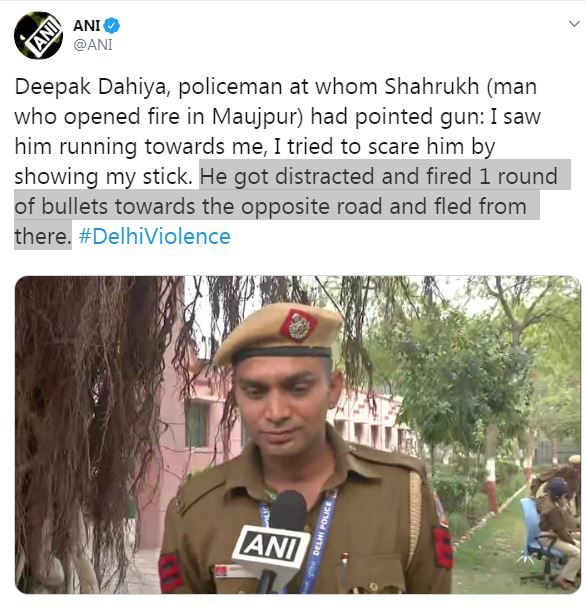 The image of the policeman, dressed in his riot gear and wearing a helmet, and armed with just a stick, confronting Shahrukh, had gone viral on social media, winning him applause from all over. A video of the said confrontation, too, had later gone viral.

31-year-old Head Constable Deepak Dahiya is a resident of Haryana’s Sonepat. He joined the Delhi Police as a Constable and later gave and passed the Head Constable exam and is currently under training in Wazirabad.

According to reports, the gunman, Shahrukh, is a 33-year-old gym enthusiast from Seelampur. He is said to have no criminal record. However, reportedly, his father is out on bail in drug trafficking charges.