The officer, who was heading a top court-ordered demolition drive against unauthorised constructions in Dharampur area of Solan district, was shot dead in Kasauli on April 1.

Kasauli, May 3: Vijay Singh Thakur, the hotelier who had allegedly shot dead Assistant Town Planner Shail Bala Sharma during a demolition drive in Kasauli district of Himachal Pradesh, has been arrested from Uttar Pradesh’s Mathura. He was suspended from work by the Electricity Department on Wednesday. Also Read - Ayesha Suicide Case: Gujarat Police Arrests Absconding Husband Aarif Khan from Rajasthan

The officer, who was heading a Supreme Court-ordered demolition drive against unauthorised constructions in Dharampur area of Solan district, was shot dead in Kasauli on April 1. A PWD employee Gulab Singh was also injured in the firing. He is admitted to PGI in critical condition. Also Read - Bihar: Shopkeeper Shot Dead on Refusing to Give Paan Masala Worth Rs 20

The Himachal Pradesh Government on Thursday told the apex court that a compensation of Rs 5 lakh will be given to the family of Assistant Town and Country Planning Officer Shail Bala Sharma. Meanwhile, rapping up the state government, the SC said, “You (state govt) allow illegal construction to take place & then when a person puts all his money into this construction, he becomes desperate, & such killing takes place.” Also Read - Husband Takes Romantic Selfie With Pregnant Wife, Then Pushes Her Off 1000-Ft Cliff to Her Death

The top court had earlier reprimanded the state government for not providing adequate security to the officer while stating that the failure to arrest the accused, who had shot at Sharma in broad daylight, was a ‘serious issue’.

Sharma (51), along with four teams of the Town and Country Planning Department, was razing unauthorised construction in the area on the orders of the top court. Upon reaching Narayani Guest House, its owner Vijay Singh tried to intimidate the team. There was an altercation between the team and Vijay following which the latter fired three rounds at the team. 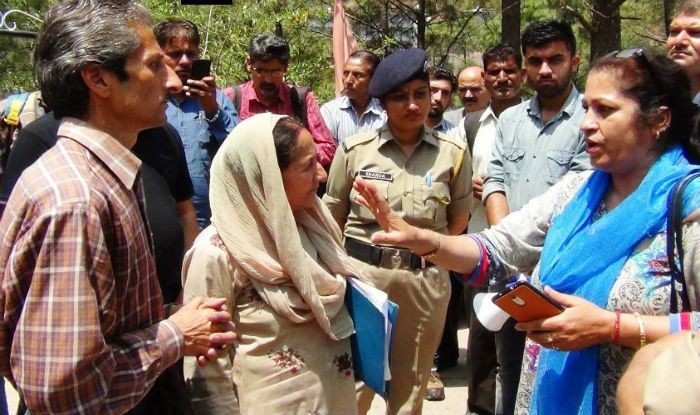 A case in connection with the matter was registered at Dharampur police station. The Himachal Pradesh police had also announced a cash reward of Rs 1 lakh to anyone who provides information on the absconding hotellier.

The demolition drive was being carried on the April 17 order by the top court which directed the state government to demolish illegal structures in hotels in Kasauli and Dharampur.