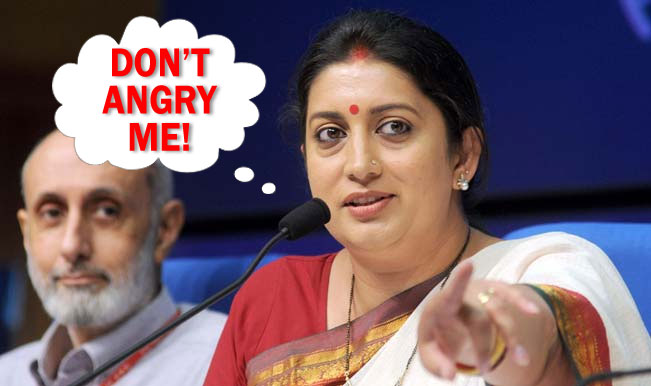 Smriti Irani rip apart an Aaj Tak anchor today who verbally assaulted her with sexual overtones on the news channel’s chat show. The Human Resource Development Minister was taking questions from the audience when the anchor, Ashok Singhal, shamelessly asked her the question – What qualities do you possess that you were made the HRD minister by Prime Minister Narendra Modi? Also Read - LJP's Chirag Paswan Promises to Stand With PM Modi And His Beliefs Until Last Breath

The angry crowd present at the event started hooting at the anchor there and then. People on social media, both Facebook and Twitter, started trending #ShameOnAajTak just as this incident took place. #ShameOnAajTak became the top trend in India no time. Smriti Irani tried to pacify the crowd, but the damage had been done. (Also Watch: Smriti Irani roars in Parliament: Watch fiery speech of Indian HRD Minister & her fight with Sugata Bose) Also Read - From Restoration of Article 370 to Blocking Bihar's Development: PM Modi Lambasts Opposition at First Rally in Sasaram | Key Takeaways

People at the event shouted slogans of ‘Modi, Modi & Maafi, Maafi‘. There were hooting of ‘Shame, Shame’ echoing loud in the Khalsa College auditorium. The brash journalist, Ashok Singhal, was seen laughing when he was exposed by Smriti Irani on his face in front of public on national television.

Prime Minister Narendra Modi completed its first year in the office on May 26, and the celebrations and talkathons seem to continue since. Cabinet rank ministers have been giving interviews and shedding light on their performances in the last year. It seems that the Aaj Tak people learnt it the harder way!