Reiterating his party's opposition to NDA government's Land Bill, Pawar said NCP was against the bill as it "forcibly" takes away farmers' land from them 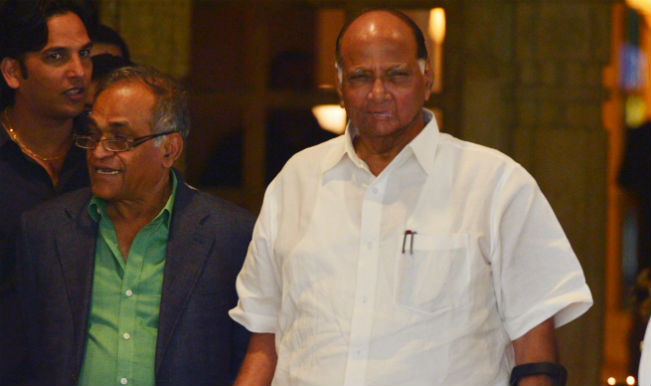 Beed (Maha), May 31: NCP President Sharad Pawar today said he will meet Maharashtra Chief Minister Devendra Fadnavis on June 2 to discuss the drought situation in the state and demand loan waiver in villages with less than 50 per cent of the average yield. Talking to reporters on day two of his three-day tour of Marathwada region to assess the drought situation, Pawar said during his meeting with Fadnavis, he would demand special package for horticulture and kharif season, electricity bill waiver and immediate disbursal of crop insurance. (READ: Narendra Modi is still selling dreams: Sharad Yadav) Also Read - 'You Can't Sing': Devendra Fadnavis’ Wife Amruta Trolled After She Shares New Song, Twitter Calls It 'Nepotism' | Watch

He also said rate of Rs 20 per litre for milk given to milk-producing farmers is too less. Pawar said he was ready to co-operate with the government for providing relief to the farmers and not indulge in politics over drought. “I would highlight farmers’ issues with the Centre as well. I urge farmers not to get bogged down by the present distress and think of ending their lives,” Pawar said. This year so far, in Marathwada 1,504 farmers had committed suicide, of which 108 were in Beed district, he said, adding, “It is sad that in government records, the number of farmers who committed suicide in the entire state is only three.” Also Read - Sharad Pawar Slams Modi Government Over Farm Laws, Says Agriculture Can't Be Run Sitting In Delhi

Reiterating his party’s opposition to NDA government’s Land Bill, Pawar said NCP was against the bill as it “forcibly” takes away farmers’ land from them. He said if issues regarding sugarcane price and sugarcane cutters are not resolved, half of sugar co-operatives in the state cannot start functioning in the next crushing season. Pawar, accompanied by Leader of Opposition in the Legislative Council Dhananjay Munde and party leader from the district Jaidutt Kshirsagar, toured three villages of Beed and interacted with farmers before proceeding to Osmanabad.