A video of Imam, threatening to cutoff Assam from the rest of India went viral on social media.

New Delhi: ‘Sharjeel Imam is being victimised for a statement that was twisted and taken out of context by the media’, Afshan Rahim, the mother of former JNU student said. Her statement comes days after a video of Imam, threatening to cutoff Assam from the rest of India went viral on social media. Also Read - Trouble For Shaheen Bagh 'Mastermind' Sharjeel Imam; Delhi, Aligarh Police File FIRs

In a letter to media agencies, Rahim also accused police of threatening and harassing the family members. “Tthe police and state authorities, against whose highhandedness Sharjeel protested, are now harassing and threatening his family member”, Imam’s mother alleged.

“The constant threat and abuse has traumatised his elderly mother and has scared his other family members. We believe in the rule of law and every cooperation has been promised. This highhandedness (by the police and the state authorities) violates the basic human rights of the family members including and not limited to his elderly mother. We demand that the police refrains from indulging in such actions,”the letter by Rahim read.

As per the letter, Imam’s family resides in the Kako town of Bihar’s Jehanabad district. 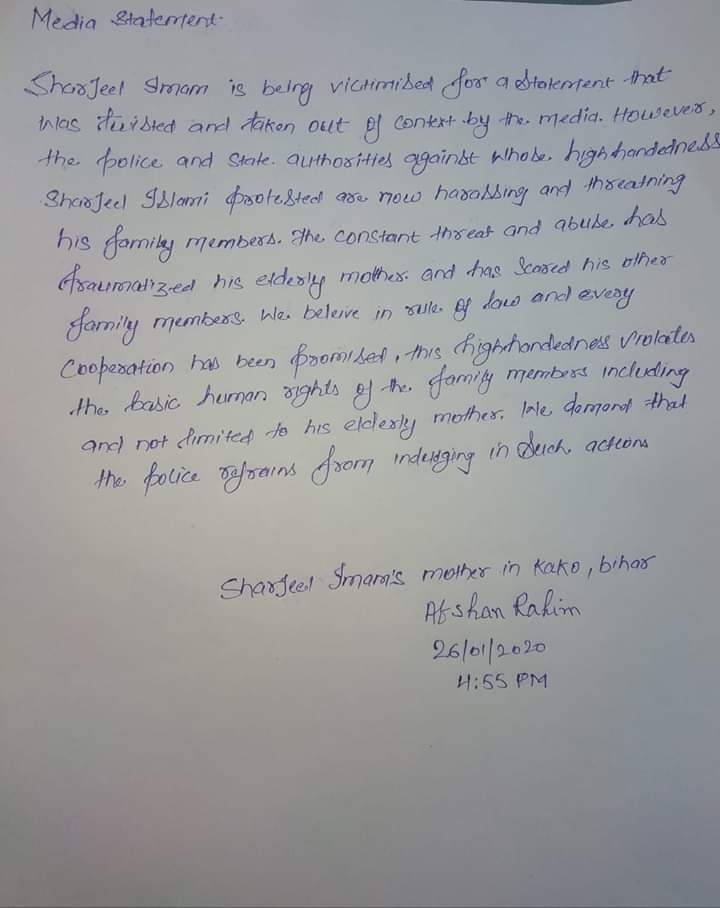 Earlier on Sunday, the Delhi Police and the Uttar Pradesh Police both filed FIRs against Imam over his controversial speech, which he gave on January 16 at the Aligarh Muslim University (AMU).

The video of the speech, shows him speaking against the contentious Citizenship Amendment Act (CAA) and National Register of Citizens (NRC). “If five lakh Muslims get together, we can cut off Assam from the rest of India easily for two-three months, if not permanently. We can easily overtake the Chicken’s Neck, which is a Muslim-dominated area, thus preventing the Indian Army from reaching Assam,” he is heard saying in the clip.

On Saturday, the Assam government had also filed a case of sedition against Imam, who is also an IIT-Bombay alumnus.