In a late-night tweet on Monday, PM Modi had 'hinted' at leaving social media March 8. A day later, however, he revealed that his accounts on Sunday would be operated by 'inspirational women' on the occasion of International Women's Day

New Delhi: Shiv Sena on Wednesday took a jibe at Prime Minister Narendra Modi’s recent tweet, in which he ‘hinted’ at leaving social media, saying in an editorial in its mouthpiece Saamana that ‘it would be impossible for the PM to cut his lifeline.’ Also Read - 'Quit Social Media Games, Focus on Coronavirus Challenge,' Rahul Gandhi to PM Modi

In a late-night tweet on Monday, PM Modi had said, “This Sunday, thinking of giving up my social media accounts on Facebook, Twitter, Instagram and YouTube. Will keep you all posted.” The tweet sent the country into a tizzy, with many even speculating that he would be launching a new ‘Swadeshi’ social media platform. Also Read - PM Modi Ends Suspense, Reveals Reason Behind 'Giving up' Social Media

A day later, however, he revealed that, on Sunday, March 8, on the occasion of International Women’s Day, his social media accounts will be operated by ‘women whose work and life inspire us.‘ 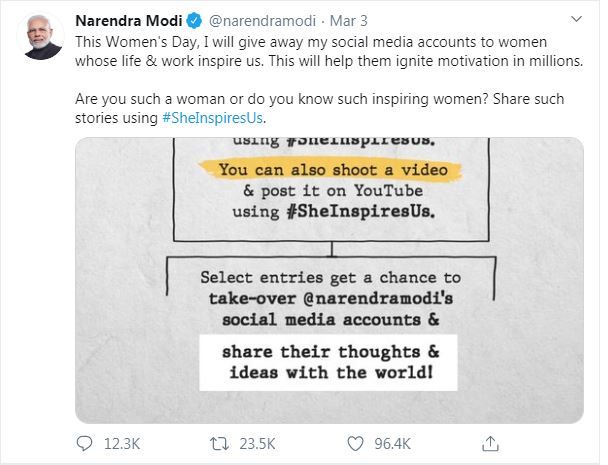 Reacting to the same in an editorial in Saamana today, the Sena remarked that many ‘Modi-bhakts,’ as the PM’s ‘diehard’ followers are referred to, would have been left worried for a few hours. “However, all the social media platforms are the BJP’s oxygen and it is impossible that the PM would cut this lifeline,” it said.

The editorial further urged the Prime Minister to use social media for positive things, just like industrialist Ratan Tata, who, it said, showed the ordeal of a sanitation worker’s daughter on social media. It further stated that the BJP won the 2014 Lok Sabha polls using social media for ‘propaganda,’ adding that the social media ‘weapon,’ however, has now started turning against the saffron party.

“The BJP’s cyber warriors lost in Jharkhand. In Delhi, it lost despite deploying a huge cyber army. It even ran a campaign labelling CAA protesters as anti-nationals, but the people did not accept it. The cyber weapon is turning against the BJP now,” the Saamana editorial said.