In response to his criticism for Modi, he said he respected him 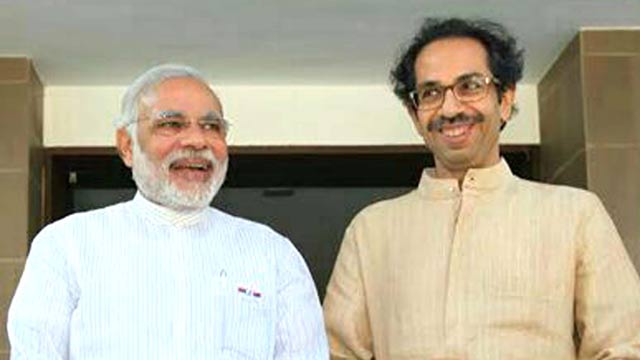 Mumbai/Nagpur, Oct 15: Shiv Sena president Uddhav Thackeray today accused the BJP of “backstabbing” allies like his party and Haryana Janhit Congress but said he respected Prime Minister Narendra Modi. “They (BJP) were with us when they needed us and left us when the need was fulfilled. What did they do with Bishnoi? They said in a public rally that he would be the next Haryana chief minister. I have the tape recording to prove it,” he told reporters after casting his vote in suburban Bandra. Also Read - Kashi Vishwanath Corridor Project: How PM Modi’s Dream Project Will Boost Religious Tourism | SEE PHOTOS

“Why did they stab us in the back? BJP will have to answer that,” he said. The Sena leader, however, maintained he personally respected Modi, who had been frequently targeted by party mouthpiece ‘Saamana’ and its Hindi publication after the split between the two saffron allies. “I have not insulted Narendrabhai. I have respect for him,” Uddhav said while responding to criticism by senior BJP leaders of an article published by ‘Dopahar Ka Saamana’ slamming Modi which also had a derogatory reference to his father. Also Read - Cyclone Jawad To Hit Odisha, Andhra Pradesh Tomorrow, NDRF Deploys 64 Teams in 3 States | Key Points

“BJP will not tolerate insult to the Prime Minister. We are not a helpless party. It is unfortunate that Shiv Sena is unnecessarily raking up Modi’s family background to garner sympathy,” Union Minister Nitin Gadkari told reporters in Nagpur after casting his vote. “Uddhav Thackeray has respect for Modi and distances himself from the language used in the article,” Sena spokesman Harshal Pradhan had said. “I never said there was no Modi wave, during Lok Sabha polls. But in bypolls later, BJP did not do so well,” Uddhav said.

Expressing confidence that Sena will form the next government in Maharashtra, he said,”People have seen Balasaheb Thackeray. They will vote for Sena. I have toured the state. There is not just a wave, there is a huge wave in our favour.”