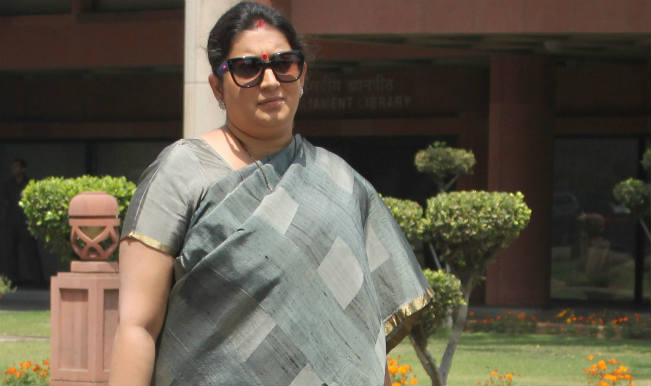 Amethi, May 26: Union HRD Minister Smriti Irani on Tuesday hailed the Modi Government’s first year in power, saying the NDA had done much more in a single year than the UPA did in all its previous years in power. “Narendra Modi’s achievements are being talked about across the world now. I believe the Modi government has done more in one year than the UPA did in all these years,” Irani said while addressing a public meeting in Salon, Raebareli. (READ: Smriti Irani to visit Amethi) Also Read - Sitharaman Holds Pre-Budget Meeting With FMs of All States, UTs | Breaking LIVE

“We never thought that the people of Amethi, Rae Bareli will long for a rail line. What couldn’t be done in years, the BJP Government has done in just one year and initiated the project of Amethi-Unchahar railway line,” she added. Irani, who lost to Rahul Gandhi in Amethi in last year’s Lok Sabha polls, further claimed that the Congress vice-president had failed to deliver on his promises made to the people of his parliamentary constituency. Also Read - Connecting India: PM Modi Flags Off 8 Trains to Statue of Unity | Check Full List, Routes And Timings Here

“Rahul ji tours the world criticising Narendra Modi but in his own constituency he cannot deliver on promises. Rahul ji should know when one wants to do something it doesn’t take much,” she said. This is Irani’s second visit to Amethi this month. She had earlier addressed a ‘ Kisan Panchayat’ in Amethi on May 12 to dispel doubts regarding the Land Acquisition Bill. Rahul Gandhi had also toured his parliamentary constituency earlier on May 19, where he appealed to the NDA Government to work for the welfare of farmers, labourers and the poor.