Besides being Special Commissioner (Law and Order), he has been handed additional charge as the city police chief. He took over from Amulya Patnaik who retired today after being given a one-month extension in January. 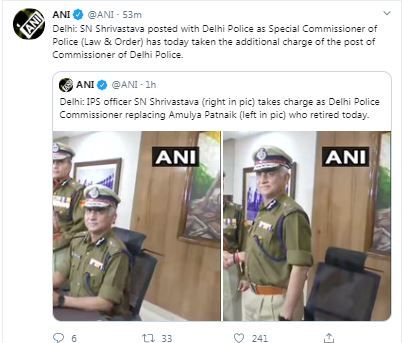 Earlier, Patnaik, who succeeded Alok Verma as Delhi’s top cop in January 2017, was scheduled to retire on January 31. In recent times, however, he came under intense scrutiny for his handling of various anti-CAA related incidents in the city, as well as the mob attack on the Jawaharlal Nehru University (JNU) campus on January 5 and the recent communal clashes in the national capital.

He was a 1985-batch officer of the AGMUT (Arunachal Pradesh-Goa-Mizoram-Union Territories) cadre.

Shrivastava, meanwhile, was serving as an Additional Director General (ADG) of the Central Reserve Police Force (CRPF) in Jammu and Kashmir, when he was repatriated from the force by the Ministry of Home Affairs (MHA) on February 25 and appointed Special Commissioner (Law and Order) as communal violence worsened in northeast Delhi.

Speaking to media after succeeding Patnaik, he said, “My first priority is to bring back peace and communal harmony to the city. We are registering riot cases, including murder sections so that these incidents don’t happen again. Efforts are on to arrest the involved culprits.”

He was handed additional charge of Delhi Police Commissioner by the MHA on February 28.