HD Kumaraswamy's Son Ties The Knot, pictures and videos flooded on social media, clearly showed that neither social distancing nor any precaution were taken by the political bigwigs during the rituals.

New Delhi: Amid the coronavirus lockdown, Karnataka Chief Minister HD Kumaraswamy’s son Nikhil tied the knot with Revathi, the grandniece of a Congress leader and former minister, in a big VIP wedding at farmhouse about 28 km from Bengaluru. The pictures and videos flooded on social media, clearly showed that neither social distancing nor any precaution were taken by the political bigwigs during the rituals. Also Read - Social Media Impact: 79-Year-Old Roadside Plant Seller's Sales Double After Viral Photo

Check out the pictures and videos here:  Also Read - Bengaluru Youth Flashes at Woman & Gropes Her, Arrested Within Hours 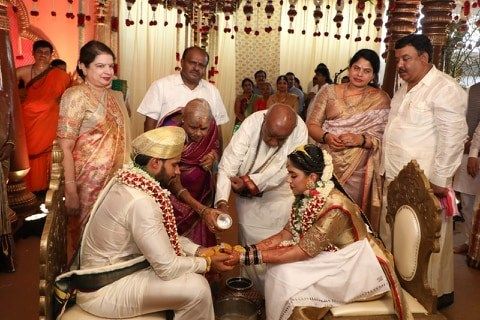 Notably, the government  has strictly banned  public gatherings, weddings and any such mass movement in the wake of COVID-19 pandemic, which has claimed lives of nearly 500 people across the country.

Former Karnataka CM and JD(S) leader HD Kumaraswamy, the groom’s father has claimed that the wedding was attended by family and relatives only. No guests were invited but all traditions were followed. Nikhil’s grandfather — JDS supremo and former Prime Minister HD Deve Gowda, grandmother Chennamma, uncles, including former minister HD Revanna, cousin and Hassan Lok Sabha member Prajwal Hegde and other family members were seen at the function to bless the newlyweds.

Last year, Nikhil, an actor-turned-JD(S) leader had hit the headlines when he unsuccessfully contested the Lok Sabha elections from his family stronghold Mandya.  Nikhil was defeated by south Indian actress Sumalatha Ambareesh, an Independent.

The 28-year-old leader got engaged to Revathi, 22, at a top hotel in Bengaluru on February 10 and a grand wedding was scheduled to be held at Janapadaloka between Ramanagaram and Chennapatna on the state highway to Mysuru on April 17. However, when the 21-day lockdown was enforced on March 25, the families decided to hold the wedding at Krishnappa’s house, hoping it (lockdown) will be lifted on April 14.Its extension and declaring Bengaluru as a coronavirus hotspot forced the families to shift it again to the farmhouse.

Earlier on Thursday, HDK, in a video message had said urged party’s leaders, cadres and supporters to bless the couple from their respective houses and not to flock to the farmhouse due to the lockdown.

“It would be difficult to maintain social distancing if the event was organised at home. That’s the reason we are organising the event at our farmhouse in Bidadi. Only around 60 to 70 people” of the family would attend the wedding”, he had claimed.

Hitting out at the former CM, Ashwath Narayan, the Deputy CM of Karnataka, said that action will be taken against HDK if guidelines were not violated during the wedding.

“Kumaraswamy has made a public statement that guidelines will be followed. He is a people’s representative. He’s in public life for a long time. He should abide by guidelines. Since he has been in a responsible position for a long time…he was chief minister of Karnataka, he’s also an MLA from Ramnagar, so guidelines must be followed. There must not be any excuse, he can’t say that people came without invitation,” news agency ANI quoted Narayan as saying.