Solar plane pilots do yoga to energise during long flights

The plane, claimed to be the world's only solar-powered aircraft, landed in Ahmedabad on Tuesday night after a 15-hour flight from Muscat. 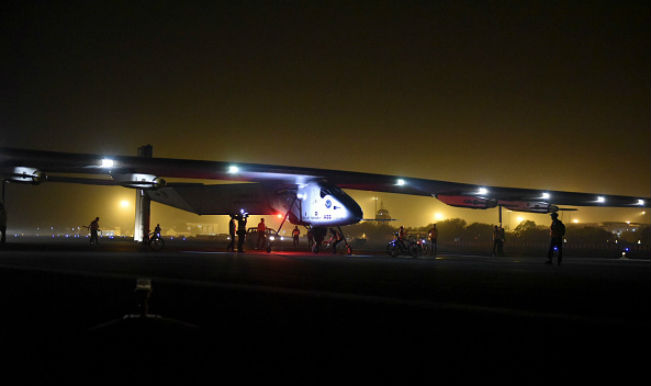 Ahmedabad, Mar 12:  As the fuel-free aeroplane Solar Impulse-2 gets energy from the sun, its pilots energise themselves by doing yoga to remain mentally and physically fit during their long flight hours. For pilots Andre Borschberg and Bertrand Piccard of the single-seater Solar Impulse-2, which is on historic trip to fly around the world, it is important to sustain themselves for 12 to 15 hours without taking a break while flying between destinations and to energise themselves they have chosen yoga. (Read: Harsh Vardhan makes statement on landing of SI2 in Lok Sabha) Also Read - This Airlines Has Launched Flight Services on Delhi-Tokyo Route

Both the pilots have been practising yoga for last 12 years under the guidance of Indian yoga guru Sanjeev Bhanot to safely take on their first round-the-world trip on SI-2. The plane, claimed to be the world’s only solar-powered aircraft, landed in Ahmedabad on Tuesday night after a 15-hour flight from Muscat. Also Read - International Travel: New Travel Guidelines For Tourists From Today, All You Need to Know

“We sleep for 20 minutes at every five hours during the flight. We also need to regain energy. For that, I started learning yoga 12 years back and have been practising it daily for the last 10 years. We also use yoga to stimulate our body and re-energise ourselves with the help of Yogi Sanjeev Bhanot,” said Borschberg, the 62-year-old Swiss pilot and CEO of the Solar Impulse project.

“The 20 minutes of sleep is necessary. During that nap, we leave the plane fly by itself by putting it on auto-pilot mode. Yoga helps in a different way, I practice yoga almost daily. It helps you think with a right mind, it helps in balance and breathing techniques and helps to re-energise,” he said. Piccard, the 57-year-old initiator and president of the Solar Impulse project, said he practices self-hypnosis to connect with the inner-self.

“I self-hypnotise to connect with inner-self. That is because hypnosis is a way to connect with the inner side of yourself,” he said. “When you live normally, you look, you feel, you get distressed, but when you start looking inside yourself, you will disconnect from the uncomfortable situation of (outer world) and you can use your inner resources and inner energy,” said Piccard, who is also a psychiatrist. Yoga expert Sanjeev Bhanot, who hails from Bikaner district in Rajasthan, said it was a challenge to keep both the pilots mentally and physically fit during the flight.

“It was a challenge for us to ensure physical fitness and mental strength for both the pilots. So we customised yoga techniques for them. They can take 20-minute nap for several times during flight. Bertrand prefers meditation, while Andre does ‘yog-nindra’ (conscious deep sleep),” he said.

“They (the two pilots) have been practising yoga everyday and seeing its effectiveness. All scientists, whether from Italy, Belgium or Switzerland, were stunned,” he said. “There is a situation when the crew in the cockpit has to bear a temperature of minus 40 degrees. In such a situation, yoga helps them as there are some ‘kriyas’ (methods) in yoga through which a person can decrease or increase his body temperature,” Bhanot said.

“We have done some modification in the cockpit considering the yoga aspect. As Andre is quite tall, we had to install two handles inside the cockpit and with that he can stretch his body so well,” he said. It took 13 years for the solar-powered project to develop and around USD 150 million has been spent on it so far. The 17,248 solar cells on the wing recharge four lithium polymer batteries weighing 633 kg each, which allow the aircraft to fly at night. From here the plane will fly to Varanasi, and from there to Mandalay in Myanmar and Chongqing and Nanjing in China and thereon to USA.