On Friday, while attending the Winter Session of the Parliament, Sonia Gandhi said she is retiring from politics.

New Delhi, Dec 16: Addressing her last speech as the President of the Indian National Congress, Sonia Gandhi on Saturday handed over the party leadership to her son and previously party Vice-President Rahul Gandhi. Sonia in her speech said Rahul has faced violence since his birth and such blatant personal attacks made him stronger. She also narrated the contribution of the Congress and her own political growth under the mentorship of former Prime Minister, Congress chief and her mother-in law, Indira Gandhi.Also Read - Breaking News LIVE Updates Nov 30, 2021: Opposition Parties to Decide on Parliament Strategy Today, Likely to Skip Winter Session

Speaking about the Congress and its role in being a strong force in the country, she said, “In the first few years of my presidentship, we started as a responsible opposition to save the constitutional values which we learned during the Freedom Struggle.” She also said, “We later formed government led by Manmohan Singh Ji and for 10 years we ran pro-people government. We introduced right to food, information, education and much more for poorest of poor Indians.” Also Read - Parliament Passes Farm Laws Repeal Bill: Govt Scared of Holding a Discussion, Says Rahul Gandhi

Talking about the struggle of the party, she said, “We are not the ones who get afraid and bow down. Our struggle is for the soul of India. The fundamental values of India are being attacked on a daily basis. Environment of fear being created. The Congress must reflect and be ready for sacrifice of any kind.”

Here is the full text of her speech 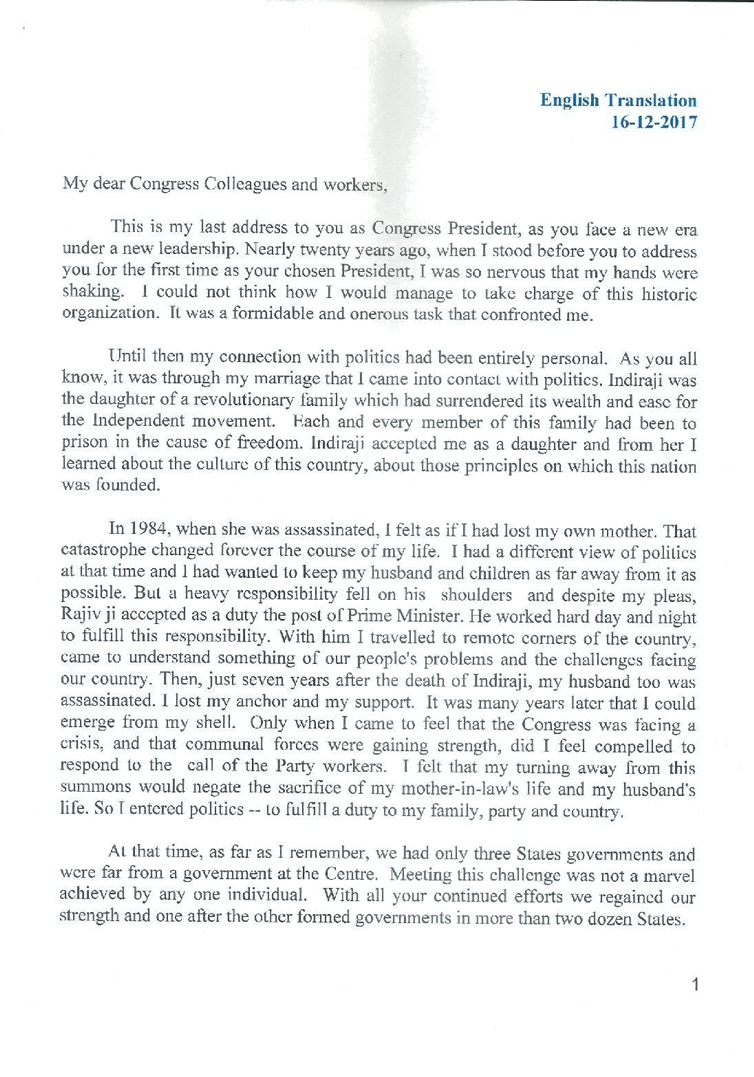 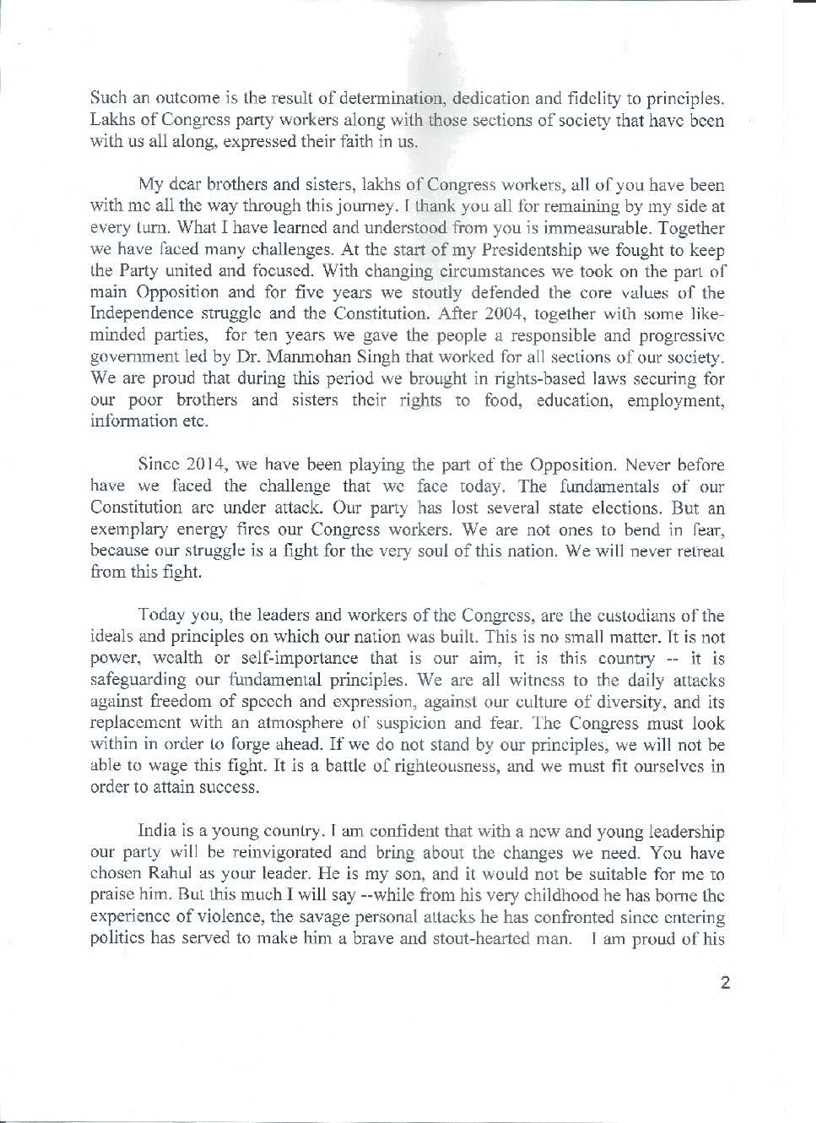 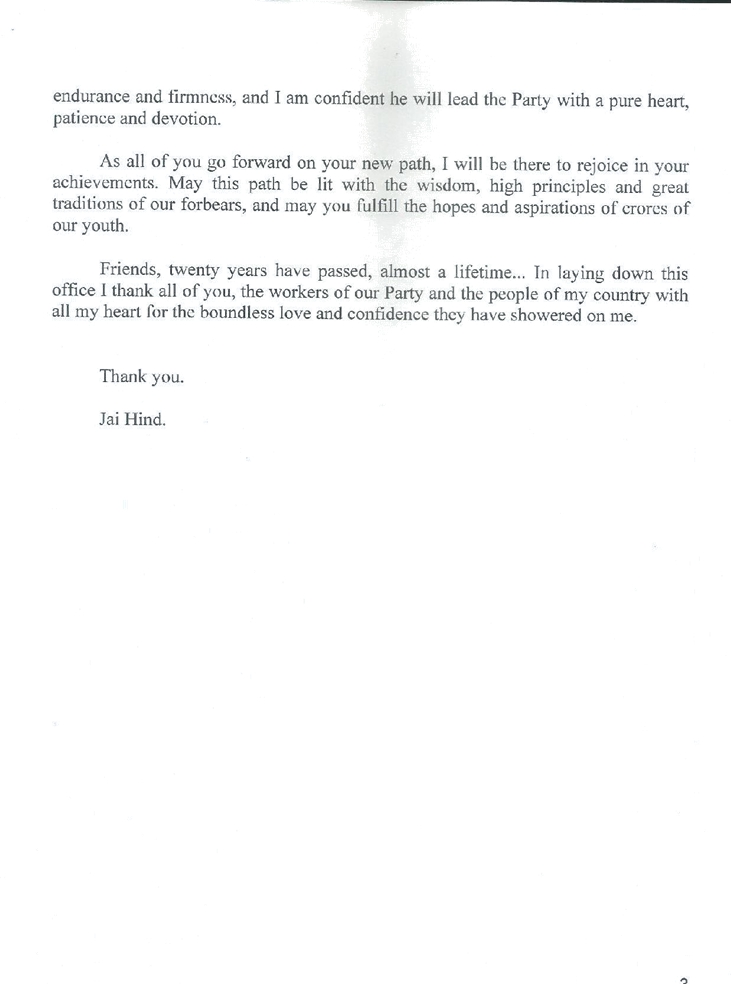 About the new President of the party, she said she has full faith in Rahul’s grit and patience. “We are a young country. We have a young leadership now. Rahul is my son and it will not be appropriate for me to praise him. But now that he is in politics, he has faced personal attacks which have further strengthened him. I have faith in his patience and grit,” she said.

On Friday, while attending the Winter Session of the Parliament, Sonia Gandhi said she is retiring from politics, however, the Congress leaders said she will always remain a guide to the party. Congress spokesperson Randeep Singh Surjewala said, “Sonia Gandhi has retired as President of Indian National Congress and not from politics. Her blessings, wisdom and innate commitment to Congress ideology shall always be our guiding light.”