Rejecting the dialogue offer on the controversial land bill, Sonia Gandhi today alleged it was a mockery of the consensus building tradition by a "myopic" Modi government. 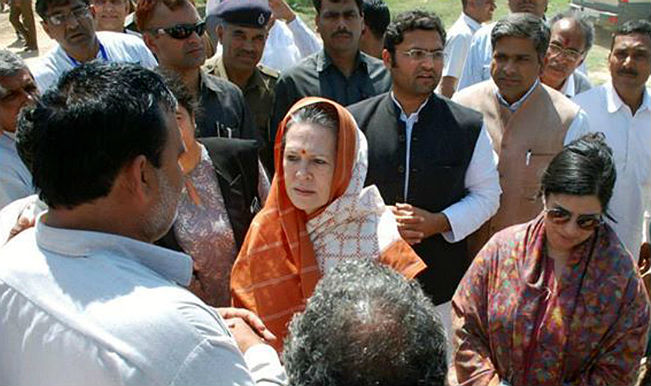 New Delhi, Mar 27: Rejecting the dialogue offer on the controversial land bill, Sonia Gandhi today alleged it was a mockery of the consensus building tradition by a “myopic” Modi government which was “bending backwards” to favour industrialists and demanded that UPA’s legislation be brought back in totality. Also Read - Sidhu Seeks Meet With Sonia Gandhi For His 13-Point Agenda to Resurrect Punjab Congress in 2022 Polls

“Proposition of a post-facto debate after unilateral imposition of anti-farmer law is mockery of building partisan consensus,” the Congress president said replying in a strongly worded letter to Union Minister Nitin Gadkari. Chiding the government for painting those opposing its land bill as anti-nationals, Gandhi asked the government to “rise above its narrow-minded politics”. Also Read - Will Consider, Says Rahul Gandhi On Request Of Senior Leaders To Become Congress President

Hailing farmers as the “backbone” of the country, Gandhi said Congress cannot support any law which hurts farmers, and asked the Modi dispensation to bring back UPA’s land bill in totality. Gandhi said it was regrettable that anyone championing the cause of distressed farmers and needy farm labourers was being branded as “anti-national” by a “myopic Modi government bending backwards to favour select industrialists”.

She said the fundamental difference between the Congress and the BJP is in understanding farmer’s distress and loss of livelihood by acquisition of land without safeguards. Being pro-farmer does not mean anti-growth, she said.

Last week, Gadkari had written to Sonia Gandhi, leaders of other opposition parties and social activist Anna Hazare inviting them to an open debate on the issue while asserting that the bill was “very much in farmers’ interest”.

Faced with stiff opposition on the land bill, the government had reached out to leaders of opposition parties, with Union transport and shipping minister Nitin Gadkari telling them that the government was willing to debate all aspects of the bill which is awaiting clearance in the Rajya Sabha.

Alleging that it is now now being widely recognised that the NDA government is “blatantly anti-farmer and anti-poor”, Gandhi said that it is “compromising the rights of the weaker sections of society to benefit a handful of private parties”.

Asserting that the interests of farmers have to be protected at any cost, Gandhi said this was “non-negotiable for the Congress party and it will “never endorse” any law that will break the backbone of this nation. Holding that the amendments brought forward by the NDA government negate the 2013 law in letter and spirit, she asked the government to rise above the realm of narrow partisan politics and bring back the 2013 law in totality, consistent with the sentiments and aspirations of the farmers.

She said that the 2013 Law was formulated on the premise of an extensive debate and consensus. “Every possible scenario of land acquisition was discussed threadbare, including the issues you have raised in your letter — irrigation, defence, electricity and industrial corridors and the bill was passed by Parliament only after all relevant stakeholders, including your party, were satisfied.

“In contrast, the amendments you have brought to this law have completely bypassed any debate or discussion. Your proposition for a debate after the government has unilaterally imposed an anti-farmer law is a mockery of the tradition of building bipartisan consensus before introducing laws of national importance,” she said.

Gandhi insisted that the 2013 law was not a legacy of just the Congress party but of all parties including the BJP which gave their suggestions and came together for a landmark legislation to give primacy to the interests of farmers and labourers.

“This explains why opposition to this amended legislation comes not just from the Congress and the like-minded parties, but also from constituents of the NDA,” she said.

Seeking to rebut points raised by Gadkari in his letter earlier, Gandhi said she was amazed at its unabashed display of “half-truths and misrepresentations.” “I should not, of course, be surprised because this is typical of your government when it runs out of logical and convincing arguments. In your letter you have sought to justify the changes you propose in the land acquisition legislation on the grounds that it promotes the interest of villages, the poor, farmers and labourers, and that it facilitates irrigation, employment, industrial corridors and the defence industry.

“Your arguments are designed to suggest that this is a new contribution that Modi government is making, in contrast with the record of the UPA government, and that those opposing your legislation are being anti-farmer and anti-national. Regrettably, all that you have said is without any foundation whatsoever,” she said.

Posing a number of questions over the intentions of the government behind bringing the land ordinance, Gandhi said that there are “fundamental differences” in the approach of Congress and BJP to the cause of farmers.

She said that while the 2013 law stipulated that the Social impact Assessment (SIA) of any land to be acquired had to be completed within six months, the NDA government has “completely done away with this requirement” and wondered “is this in the interest of farmers?

“The 2013 law required that 80 per cent of the farmers give consent in acquisition for private companies and 70 per cent for PPP projects. But you have done away with this consent requirement altogether except for a few insignificant cases. Is this in the interest of farmers?

Gandhi also pointed out that under the 2013 law, those whose lands were being acquired under the 1894 Act and who hadn’t accepted the compensation or whose lands had not been taken possession of, would get enhanced compensation.

“By amending this provision and adding another qualification you have disqualified lakhs of farmers who would have got enhanced benefits under the 2013 law. In this process you have also gone against recent judgements of the Supreme Court. Is this how you protect the interests of farmers?

“In the 2013 law, land that had not been utilised for a period of five years was to be returned to the original owners. But you have now allowed the acquirer to hold the land virtually for as long as desired.”

Gandhi also slammed as “completely ill-founded” the government taking credit for enhanced compensation and Rehabilitation and Resettlement (R&R) benefits for 13 laws that are in the Fourth Schedule of the 2013 Act. “The fact is that Section 105(3) of the 2013 Act mandates that within one year of its coming into force, these 13 laws had to be amended to provide for enhanced compensation and R&R benefits at par with the new land acquisition law. After assuming office your government had no choice but to make these amendments.

“Further, you have used these mandated amendments as a cover to push through other changes that significantly dilute the 2013 law. Your attitude to these matters and your proposed legislation make a mockery of your claim that you stand for the interest of farmers,” she said pointing to “digressions” in Gadkari’s letter.

Reminding that Government projects do not require consent under the 2013 law, she alleged that the ruling dispensation’s position on defence, irrigation and electrification issues is a “blatant attempt to divert attention” from the anti-farmer amendments.

Gandhi said that while there can be no two opinions that the country absolutely needs to enhance its irrigation potential, build more indigenous defence factories and further improve rural infrastructure, “this cannot be at the cost of pushing farmers into a pitiable condition or destroying their livelihoods”.

She claimed that in the 2013 Act, these issues were actively dealt with in order to facilitate rural infrastructure and defence industry, without sacrificing the interest of farmers citing various clauses from the old bill. “Section 40 of the 2013 Act (the urgency clause) specifically exempts defence and national security projects from both the consent and Social Impact Assessment.

“Because of this, the Standing Committee headed by no less a person than Sumitra Mahajan, had pointed out that there is no need to put the Defence of India Act (and other allied legislations) in the exempted legislation list (the Fourth Schedule), a view that was also endorsed by the Ministry of Defence,” the Congress President said.

“Even you must recognise that all this makes your claim that the 2013 law is a hindrance to national security and the promotion of irrigation and rural development completely baseless and untenable,” she said.

The Congress President also wondered as to why the NDA government amended the 2013 Act to acquire a kilometre of land on either side of the industrial corridor. “This will in no way help the corridor project, but will allow private parties to make huge profits at the cost of the original land owners,” she said as she also pointed out to a number of “untenable claims” in Gadkari’s letter alleging that they are “at variance with facts”.

“2013 law also had provisions to penalise officers who do not treat compliance with it with seriousness. But in your amendments you have now allowed the government to decide who should be prosecuted and who should not among those very officers who violate the law,” the Congress President said.