Rajapaksa arrived at the over 2,000-year old shrine just before the crack of dawn and spent about an hour.

Rajapaksa, who stayed at the heavily guarded TTD Guest House on the hills overnight after his arrival on Monday evening, came to the over 2,000-year old shrine just before the crack of dawn and spent about an hour, officials said. Also Read - Dimuth Karunaratne, Oshada Fernando Help Sri Lanka Draw 2nd Test Against West Indies

Clad in the traditional attire of white shirt and silk dhoti, the 74-year old Lankan leader, an ardent devotee of Lord Venkateswara, was accorded a traditional reception by top authorities and conducted to the sanctum sanctorum, amid chanting of Vedic hymns by priests. Also Read - BREAKING: Sri Lankan Navy Arrests 20 Indian Fishermen For 'Trespassing'

The visiting leader was presented with a sacred silk cloth, a holy memento and sacred prasadam by the temple officials. 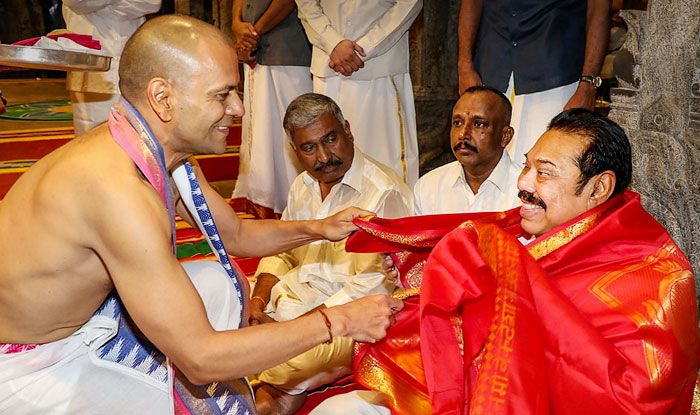 He had arrived on the hills on Monday by road from Renigunta airport, about 20 kms from Tirupati.

After a brief halt in the guest house on his return from the temple, Rajapaksa left for Colombo from Renigunta.

This is Rajapaksa’s maiden visit to the temple as Prime Minister. He had visited the shrine and paid his obeisance to Lord Venkateswara on several occasions in the past as the island nation’s President and also after demitting the high office, officials said.

Rajapaksa, who arrived in India on Friday on his first overseas tour after being appointed as Sri Lankan prime minister in November last year, had visited Varanasi, Sarnath and Bodh Gaya after his engagements in New Delhi.

On Saturday, Prime Minister Narendra Modi had held talks with Rajapaksa, elder brother of Sri Lankan President Gotabaya Rajapaksa, covering the entire expanse of bilateral ties between the two countries including in areas of defence and security.