In a fresh notification, Srinagar Airport on Saturday said all flights and services will remain suspended as continued snowfall has reduced the visibility at the airport.

Srinagar: All operations at the Srinagar Airport in Jammu and Kashmir have been delayed due to heavy snowfall in the area. In a fresh update on Saturday, Srinagar Airport issued the notification that all flights and services were delayed as continued snowfall has reduced the visibility at the airport.

“The continued snowfall has reduced the visibility at the airport. The snowfall is likely to continue till 11 am. All operations shall be delayed,” Srinagar Airport said, news agency ANI reported.

The India Meteorological Department (IMD) said that intensity of the ongoing snowfall at Jammu and Kashmir’s Gulmarg, Pahalgam and light rain at scattered places is expected to increase “as the day progresses” and on Saturday resulting in heavy rain/snow in the Union Territory.

“Forecast: Expect further increase in rain/snow intensity as the day progresses with main intensity of heavy to very heavy rain/Snow during January 7 (night) and January 8. Gradual improvement from January 9 morning onwards in J&K,” the IMD said. 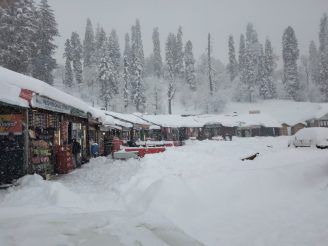 A view of the area covered with a thick layer of white snow during a fresh snowfall in Gulmarg. (Photo: ANI)

The IMD also warned of avalanche/landslide in vulnerable spots. It also warned that the present weather may “affect surface transport on January 7 and 8 and air transportation on 8th.”

“People are once again requested NOT to venture in avalanche-prone areas (Our data shows that most avalanches triggered during intense heavy snowfall). Follow traffic advisory seriously. Maintain proper ventilation of your rooms.” 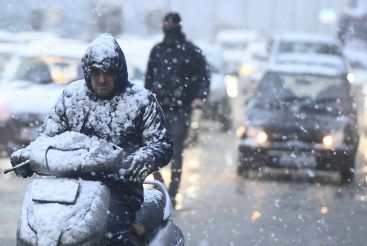 A man rides a scooter along a road during a snowfall in Srinagar on Friday. (Photo: AFP)

Reports from hill stations of Gulmarg, Pahalgam, and Sonamarg said heavy snowfall has already started there while moderate snowfall has started in Srinagar city.

Speaking to ANI, Mohammad Nazim, a Srinagar resident, said,”It is amazing, snowfall is the beauty of Kashmir and I am enjoying this.” 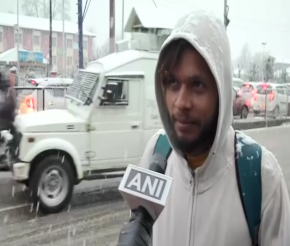 Another resident Ishfaq said, when it comes to snowfall, it is very good for Kashmir. It not only attacks tourism but also helps in economic activity. “Snowfall in Kashmir attacks tourism, people like to visit in the place during snowfall,” he said. 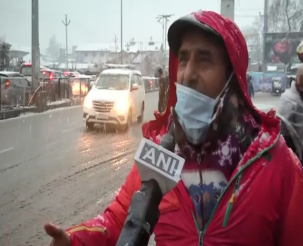 An official of the MET department said moderate snowfall was reported from most areas in south and central Kashmir.

“The intensity of the snowfall is going to be heavy tonight and tomorrow. The weather is likely to improve from Sunday,” the official said.

The snowfall, which began late in the afternoon, forced cancellation of several flights to Srinagar airport. Of the 37 scheduled flights, 23 had operated till the snowfall began, they said.

People living in the mountain districts of the valley and in Chenab region have been advised not to venture out unnecessarily, the official added.