Bharatiya Janata Party (BJP) leader Dr Subramanian Swamy sent a legal notice to leading national daily the Time of India on Sundayseeking an apology for allegedly publishing false and defamatory news about him. 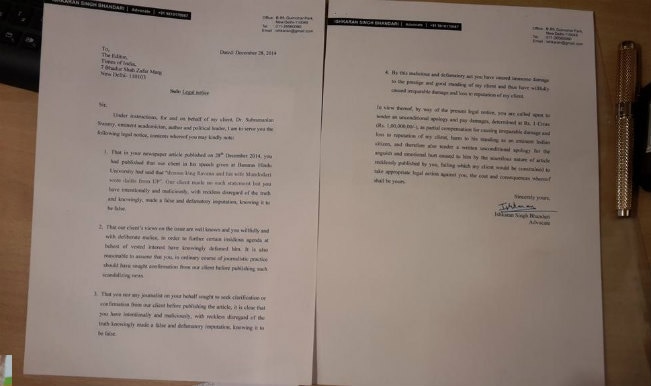 Describing the TOI report false, Swami in a legal notice said that he did not make any such statement. Swamy further accused the newspaper of intentionally publishing the false report to spoil his reputation. Also Read - Delhi Rape Case: Bhim Army, Students Join Activists to Protest Against 9-year-old Girl's Death

Seeking an unconditional apology, Swamy argued that the reporter or the publisher should have confirmed the news with him before publishing it. Swami demanded apology along with Rs 1 crore for defaming him.

The newspaper reported, “Swamy surprised the gathering with his historical finding that demon king Ravana and his wife Mandodari were dalits from UP. He said that Ravana was born at Basrakh near Ghaziabad while Mandodari was from Meerut region. After being blessed by Lord Shiva, Ravana dethroned Kuber to capture power in Lanka.”