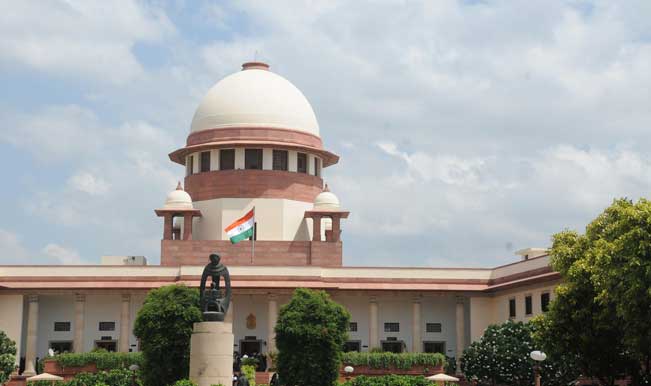 New Delhi, Nov 20: Suspecting the conduct of Central Bureau of Investigation (CBI) chief Ranjit Sinha, the Supreme Court Thursday asked him to withdraw from the 2G telecom spectrum allocation case, but also said this was not a stricture against the premier probe agency. An apex court bench of Chief Justice H.L. Dattu, Justice Madan B. Lokur and Justice A.K. Sikri said the senior-most officer heading the investigating team in the 2G case must now take over the probe into the alleged scam in the allocation of 2G telecom spectrum. Holding as credible the allegations of interference and scuttling of probe by Sinha in the cases, the court recalled its Sep 15 order directing the petitioner, the non-profit Centre for Public Interest Litigation, to reveal the identity of the whistleblower who gave information on Sinha’s alleged interference. Also Read - Delhi-NCR Pollution News: SC Appoints Ex-judge Madan Lokur as One-man Panel to Monitor Stubble Burning

The court, while not passing a detailed order with reasons, said it was delivering this order as it felt it would otherwise affect and hurt the image of the country’s premier probe agency. “We are not purporting to pass an elaborate order. Prima facie, this (allegation against Sinha) appears to be credible and it requires to be accepted. We reiterate we do not intend to spoil the reputation of the institution by passing a detailed order,” the court said. Also Read - Subramanian Swamy on 'CBI Closing SSR Case' Rumours: Why People in Mumbai in Such Huge Hurry to Close Case?

“We suspect your (Sinha’s) actions. The suspicion is substantiated by special public prosecutor Anand Grover, who is our representative, who has gone through the records. He has given synopsis of the file noting,” the court observed. “Prima facie it appears that things are not well. It inspires no confidence and would amount to derailing the trial. You can’t brush aside their (the petitioners’) statements as false and malicious,” the court added during the course of the hearing. Read: Court agrees to hear plea on 2G case whistleblower identity

“When it appears to us that things are not well, somebody may take over and proceed. We don’t want to pass an order casting aspersions on the investigation,” the court told senior counsel Vikas Singh, who appeared for Sinha, while directing his client to recuse himself from the investigation. Acknowledging that Sinha’s conduct in handling related cases of Dayanidhi Maran, Reliance Telecom and others did not inspire the court’s confidence, Vikas Singh sought to establish the bona fides of the CBI director by seeking a look at the files placed as evidence . He said the view taken by Sinha in the Dayanidhi Maran-Maxis-Aircel case and Reliance Telecom case, among others could have different interpretations. But if Sinha’s actions and opinions are suspected, then nothing remains to be said, Vikas Singh told the court, defending his client’s position.

“Incorrect, mala fide and motivated,” these are not attributes to describe Sinha’s conduct, he added. To that, Chief Justice Dattu told Vikas Singh: “A detailed order passed by us may damage the position of a great organisation (CBI). Think, how we can solve the problem.” But as Vikas Singh sought to justify Sinha’s actions, the bench said: “You have a justification but that should appeal to us.” The bench even snubbed Vikas Singh, alluding it only acted after it was forced by circumstances.

“What other alternative did you have?” queried the court when Vikas Singh said the probe agency had received the attorney general’s opinion Aug 4, and that on the same day, it had ordered the filing of a charge-sheet against Maran. The court alluded that this was the only option left after Attorney General Mukul Rohatgi had given his opinion for filing charges against the Marans in the Maxis-Aircel case. Sinha came in for a rebuke in the Reliance Telecom matter.

“The special public prosecutor (then Uday Umesh Lalit, who is now an apex court judge) asked you not to press with the filing of an affidavit (based on the law ministry’s legal opinion). But you still persisted,” the court said. “When Special Public Prosecutor said that this line of thinking I don’t accept. Should you not stop?”