India and China have resolved the stand-off at the Ladakh border and withdrawal of troops will begin today and be completed by September 30, External Affairs Minister Sushma Swaraj said describing the resolution of the issue as a "big accomplishment" 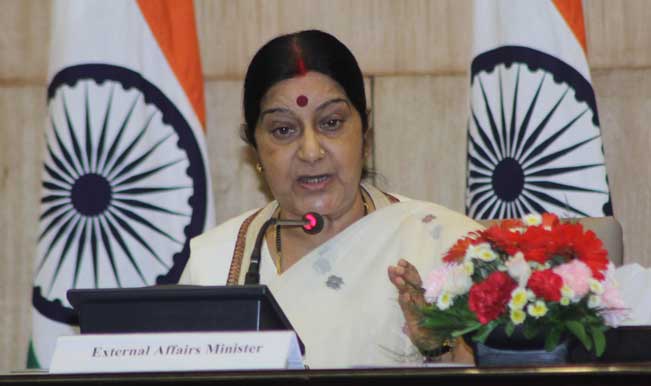 New York, Sep 26: India and China have resolved the stand-off at the Ladakh border and withdrawal of troops will begin today and be completed by September 30, External Affairs Minister Sushma Swaraj said describing the resolution of the issue as a “big accomplishment.” “I am happy to tell you that both nations have sat down and resolved the (border-standoff) issue. Timelines have been decided,” Swaraj told Indian reporters here after her meeting with the IBSA Foreign Ministers on the sidelines of the ongoing UN General Assembly session. Also Read - China, India Must Not Unilaterally Change Border Situation Along LAC: MEA Insists Ahead of Bilateral Talks

Swaraj met with Chinese Foreign Affairs Minister Wang Yi yesterday at the United Nations and said that she discussed the border stand-off issue with him. Swaraj said during Chinese President Xi Jingping‘s visit to New Delhi this month, somewhere a “shadow” of the border incident was cast on the visit even though the visit in itself was “very historical” and very good outcomes came from it. Also Read - 'Kashmiris Don't Feel They Are Indians & Would Rather Prefer to Be Ruled by China', Says Farooq Abdullah

The two armies were engaged in a stand-off at Chumar region in Ladakh, coinciding with the first visit of the Chinese President. Tension in the area erupted last Sunday when some Chinese workers, who were constructing a road on their side, crossed into the Indian side and also claimed that they had orders to build a road up to Tible, 5-km deep inside Indian territory. Swaraj said the withdrawal of the troops will begin today and will be completed by September 30, adding that the troops of both the nations will return to their positions as they were on September 1, 2014.

“The bad phase will end and by September 30th, the withdrawal of troops will be completed. I talked about this with the Chinese Foreign Minister. I beleive this is a big accomplishment,” she said. Swaraj said she also discussed with China the issue of UN Security Council reform and the need to complete the reform process, including expanding its permanent membership by 2015, which will be the 70th anniversary of the world organisation.

She described her meeting with her Chinese counterpart as “very successful.”