Chandrababu Naidu Under House Arrest, Says ‘You Can’t Play This Type of Politics, You Can’t Control us’

TDP Chief N Chandrababu Naidu was put under house arrest on Wednesday after which he said, "This government is violating human rights & fundamental rights. I am warning the government. I am warning police also."

New Delhi: Former Andhra Pradesh Chief Minister N Chandrababu Naidu who was under house arrest on Wednesday lashed out at the government for preventing him from leading a protest march by the Telugu Desam Party TDP. Also Read - 'TDP Will Merge With BJP, Modi Needs Ideas of Chandrababu Naidu,' Says Former MLA

“This government is violating human rights & fundamental rights. I am warning the government. I am warning police also. You cannot play this type of politics. You cannot control us by arresting. Whenever they allow me, I’ll continue ‘Çhalo Atmakur’,” said TDP Chief N Chandrababu Naidu. Also Read - Now, Notice Served to Ex-Andhra Pradesh CM Chandrababu Naidu to Vacate Official Residence

Meanwhile, the Amaravati Police locked the main gate of TDP Chief Naidu’s residence at Undavalli as he was about to leave for Guntur town to lead the ‘Chalo Atamakur’ rally even after being placed under preventive detention, stated news agency ANI. Also Read - '#TDPWillBeBack,' Chandrababu Naidu Puts up a Brave Front After 4 TDP Rajya Sabha MPs Join BJP

As tension prevailed outside Naidu residence on Wednesday, his son Nara Lokesh broke into an argument with the police officials. Soon he was also put under house arrest. On being put under preventive custody, the TDP leader Nara Lokesh said, “This is dictatorship, we are being stopped in an undemocratic way. TDP leaders and workers are being harassed. YSRCP MLAs are openly threatening us, saying police is with them.”

Nara Lokesh added, “The ruling party is trying to strangulate our party across Andhra Pradesh. We were doing our activities in a democratic manner but our entire leadership was put under house arrest. This is the murder of democracy.”

Notably, the protest march was planned by the TDP leaders over the alleged attacks on their cadres by the ruling YSR Congress Party leaders. For instance, eight workers were killed in a recent attack in Palnadu region, alleged the TDP leaders who further claimed that 500 TDP activists and sympathisers have been attacked since May. 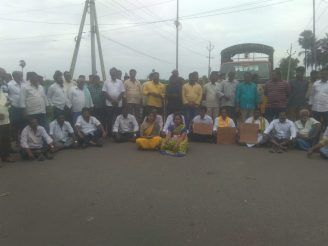 Police have clamped prohibitory orders in Palnadu region of Guntur district to prevent any showdown as the YSR Congress Party (YSRCP) too called for a counter protest ‘Chalo Atmakur’ march with victims of the attacks by TDP leaders during the last five years.

As police did not allowing Naidu to leave his house, he launched a day-long fast at his home. During a teleconference with party leaders, Naidu asked them to protest wherever they were stopped by the administration.

TDP leaders and workers heading to Naidu’s house and also to Guntur were stopped at different points and arrested by the police. 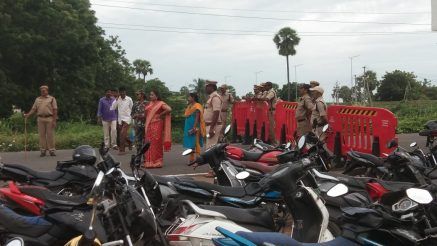 Tension prevailed in Guntur town as additional police forces were deployed to foil TDP’s march planned to begin from the camp set up by the party for victims of violence by the ruling party leaders.

Meanwhile, the Andhra Pradesh police have put several TDP leaders under house arrest in view of the party’s call for ‘Chalo Atmakur’ rally on Wednesday.

Andhra Pradesh: TDP leaders and workers who were trying to go to Chandrababu Naidu's residence stopped by police and taken into preventive custody. pic.twitter.com/Ionmrkf9CR

On Tuesday, the Director General of Police Gautam Sawang informed that there was no permission for meetings, processions, rallies or protests in Palnadu region as Section 144 of Criminal Procedure Code (CrPC) and Section 30 of Police Act were in force. Section 144 has also been imposed in Narasaraopeta, Sattenapalle and Gurajala.