TDP MP N Sivaprasad Dons Another New Avatar at Parliament to Demand Special Status For Andhra Pradesh: Here’s a Look at His Avatars so Far

He had reportedly done something similar at the time to the bifurcation of Andhra Pradesh as well.

New Delhi, April 4: Telugu Desam Party MP Naramalli Sivaprasad has been a schoolboy, a farmer, a washerman, even a woman in the past one month. He has caught everyone’s fancy, be it photographers on duty at Parliament or MPs turning up for work. The Chittoor MP has been protesting for a special status to his native state of Andhra Pradesh. And in his attempt to draw attention to his party’s demand, he has donned many avatars. Also Read - Lok Sabha Passes Bill to Cut Salaries of MPs by 30% For a Year to Meet Covid-19 Exigencies, No MPLAD Funds For 2 Years

In an interview with a leading daily recently, the 66-year-old qualified doctor from Chittoor admitted that he planned to take on 21 characters in this Parliament session that concludes on April 6. Playing a character to drive home his point comes naturally to Sivaprasad, an established Telugu actor and director. Soon after demonetisation in November 2016, he had reportedly walked into Parliament with stickers of people in stress stuck all over his outfit. No wonder, he left the House in splits. Also Read - Parliament Winter Session Day 2 Updates: TMC Demands 'Swachh Hawa Campaign' Amid Pollution Debate in Lok Sabha

He had reportedly done something similar at the time of bifurcation of Andhra Pradesh as well. Meanwhile, this session, Prasad has highlighted different problems by donning different avatars. For instance, he has dressed as a farmer to focus on the plight of the peasantry. As a weaver, he has shown how GST has hit the weaver community. He said, with colour threads slung over his shoulder, that those threads can weave a cloth but can choke a person as well. Dressed as a schoolboy, wearing shorts and a shirt and holding a book and a scale, Sivaprasad talked about how Prime Minister Narendra Modi had been a “bad student”. Also Read - Parliament Session to be Extended by 8 Working Days

TDP MP Naramalli Sivaprasad dresses up as a washerman to protest over demand of special status for Andhra Pradesh, other TDP MPs also staged protest in Parliament premises. Sivaprasad has earlier dressed up as a women & a school boy among others #Delhi pic.twitter.com/3QPTgJ129r

Wearing a yellow saree once, in what he called his most difficult role to date, Sivaprasad said the Centre had “cheated the women of Andhra Pradesh”. As a tantrik, he wanted to warn Modi not to “play with God”. He said God had appeared in his dream and told him to caution Modi. Among the other characters Sivaprasad played this session are that of Krishna, Narad muni, B.R.Ambedkar, Raja Harishchandra, Parashuram, Sardar Patel, tribal freedom fighter Alluri Sita Rama Raju, a cattle herder, a Christian priest, a washerman, and a Swachh Bharat Abhiyan volunteer. 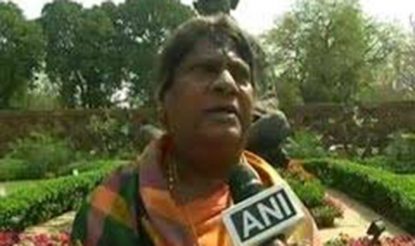 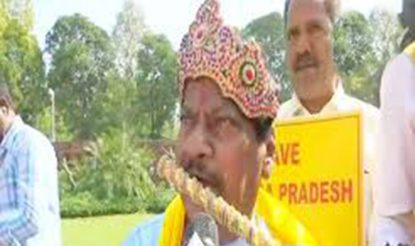 Sivaprasad says people around him come up with suggestions for characters he ought to play. His wife helped him with a woman’s getup. He said he had to be cautious with that one; he didn’t want to end up being ridiculed. This Parliament session has been marred by protests over different issues. But Sivaprasad has continued relentlessly in his endeavour; if only his message got to his target audience just as he wanted.