The strategic importance of Vietnam to India 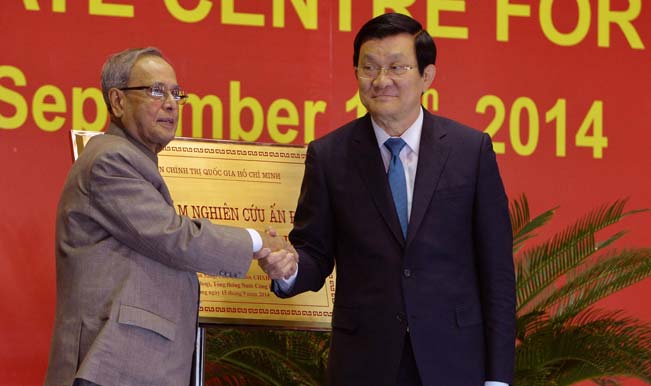 September was a busy month for Indian diplomacy with a slew of high-level visits – both outgoing and incoming. Prime Minister Narendra Modi visited Japan and now is headed to the US, External Affairs Minister Sushma Swaraj made a number of visits around the extended neighbourhood in Central and Southeast Asia, while India hosted the Chinese president, the Australian prime minister and the German foreign minister. But one visit which did not garner as many headlines as the others but could show its real significance in the long run was the presidential state visit to Vietnam, a key pillar of India’s new-look “Act East” policy. Also Read - Smart City Index 2020: Indian Cities Drop in Global Smart City Index; Singapore On Top

Few other bilateral relationships have seen such sustained, high-level engagement as the one between New Delhi and Hanoi. President Pranab Mukherjee’s four-day visit, which saw seven agreements signed including on direct air services, two additional offshore oil blocks, and a line of credit for defence procurement, was preceded by the Indian external affairs minister in late August and will be followed by the Vietnamese Prime Minister Nguyen Tan Dung ‘s visit in October with a large business delegation. Also Read - International Flights: Air India Plans To Operate Special Flight From Basra To New Delhi On September 17 | Details Here

The importance of India was evident during Mukherjee’s visit with the entire gamut of Vietnamese leadership – the president, the prime minister, the chairman of the national assembly, and the Communist Party general secretary – meeting him. Vietnamese President Truong Tan Sang gave his guest quite some time – besides one-on-one and delegation-level talks, the Bodhi sapling planting, and the ceremonial banquet, he also attended the inauguration of the India Study Centre at the Ho Chi Minh National Academy, said Anil Wadhwa, secretary (east) in the Indian external affairs ministry.

Underpinning the political relations are flourishing economic links with cooperation in energy, in public and private sector investments, and growing trade – $8 billion in 2013-14 already, as against $7 billion that was expected by 2015. The two sides have now fixed a target of $15 billion plus by 2020 with a focus on tourism, garments and textiles, pharmaceuticals and agriculture.

And there are the additional oil blocks in the South China Sea – well out of the contested areas – which are promising, as per Petroleum and Natural Gas Minister Dharmendra Pradhan, who had accompanied Mukherjee. He also sees a strong market for fibre yarn, a byproduct of the Indian petroleum industry, in Vietnam for its garment industry. But, as per Indian Business Chamber in Vietnam (Incham) chairman Harish V. Taparia and India diplomats in Hanoi and Ho Chi Minh City, what Indian businessmen and entrepreneurs can play more key roles on are in English language teaching and healthcare.

Another learning experience for Indian industry can be the Vietnamese pride in indigenous production. Prime Minister Modi launched the “Make in India” campaign Thursday but “Made in Vietnam” is already a strong sentiment there with an overwhelming number of business establishments and shops proudly flaunting the fact.

But it is eventually the strategic links that will gain primacy. The defence partnership will get a fillip with the line of credit for Vietnam to buy offshore patrol vessels as well as other equipment yet to be identified. This could include the Brahmos cruise missile, on which Vietnam is keen, and India see no problems in supplying. Furthermore, there are talks on for training for Vietnamese in submarines and jet fighters.

But spatially, the relations could allow India to expand its zone of influence – hitherto envisaged from the Straits of Hormuz to the Straits of Malacca – further east on to the South China Sea and onward to the Pacific as it cements relations with Japan and Australia. This would frustrate the perceived Chinese strategy to box the country in to the Indian Ocean area. Perhaps this was the underlying pattern of the recent visits?