Her creativity and vision towards developing 'a better world and healthy lifestyle' is well reflected through her colourful doodle, read Google's official statement.

Pune, Nov 13: Google India will feature eleven-year-old Anvita Prashant Telang’s doodle on Google’s homepage on November 14 to celebrate Children’s Day. The eleven-year-old recently won the national level Doodle 4 Google contest. Her doodle titled ‘Live in the present’ on this year’s theme ‘If I could teach anyone anything, it would be’ won praises. Telang who loves to draw is a student of Vibhgyor High School in Balewadi, Pune. Also Read - Nepal to Send New Map to India, United Nations; Here's Why The World Body Won't Recognise it

Times of India quoted her mother, Aparna Telang saying, “Although Anvita is a regular 11-year-old, sometimes her answers are so philosophical that they flummox me. Sometimes I tell her what is happening in my office and her replies have been very mature and different from what you would expect from someone as young as her.” Also Read - In a First, Facebook, Google, Amazon, Apple CEOs to Testify Before US Congress Today

Anvita believes that the world is failing to enjoy little things while running at a faster pace. Anvita said, “That is what I have tried to show in my doodle. I try to live in the present and not worry too much about anything. That keeps me happy.” (ALSO READ- Teachers Day 2016 Google Doodle: Back to School Teachers Day doodle is adorable!) Also Read - Google Extends Work From Home For Employees Till July 2021 | Read Details 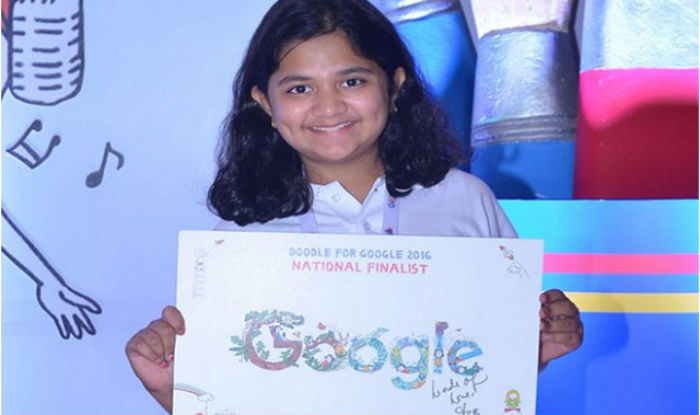 An official statement from Google said, “Her creativity and vision towards developing ‘a better world and healthy lifestyle’ is well reflected through her colourful doodle where she has showcased how everyone should ‘enjoy every moment’ and appreciate the simple things around us and live stress-free.”

Her doodle illustrates greenery, marine life, balloons and things are pleasing to one’s eyes. With the doddle she wants to spread the message of enjoying every moment of life.  “Since 2009, Google has been running Doodle 4 Google contest. “With ‘Doodle 4 Google’ competition, we aim to promote creativity, passion and imagination in younger users. We congratulate Anvita for being judged as the winner this year,” IANS quoted Sapna Chadha, Head of Marketing, Google India, in a statement. (ALSO READ: Google celebrates Children`s day with doodle)

Time is running out. Have you voted for your favourite young artist yet? #Doodle4Google ends tomorrow. https://t.co/nIu6MY9ESC pic.twitter.com/W0mnvxBwYX

Entries for the competition came from over 50 cities across the country. The doodles were evaluated on the basis on artistic met and creativity. It was also judged on this unique approach to the Doodle and theme communication. In a press statement, the company said with this program it aims to “celebrate and promote creativity, passion, and imagination in our younger users.” Before deciding the winner, the entrants went through two rounds of judging. While they were judged by their schools for creativity, were later evaluated by national judges comprising of Art Director Savio Mascarenhas, Google’s Chief Doodler Ryan Germick, Cartoonist Ajit Ninan and Creative Rob. (Image source- Facebook)