The former Congress president used the term 'MOSH' for Prime Minister Narendra Modi and Home Minister Amit Shah. He also referred to NIA officers as 'stooges' of the government.

In a sudden development last night, the Centre handed over the probe into the case to the NIA, a day after Maharashtra deputy Chief Minister Ajit Pawar and Home Minister Anil Deshmukh were briefed by Pune Police’s top brass over the status of their investigation into the case.

On Saturday, the former Congress national president, referring to Prime Minister Narendra Modi and Home Minister Amit Shah as ‘MOSH,’ tweeted: “Anyone who opposes the MOSH agenda of hate is an urban naxal. Bhima Koregaon is a symbol of resistance that the government’s NIA stooges can never erase.” 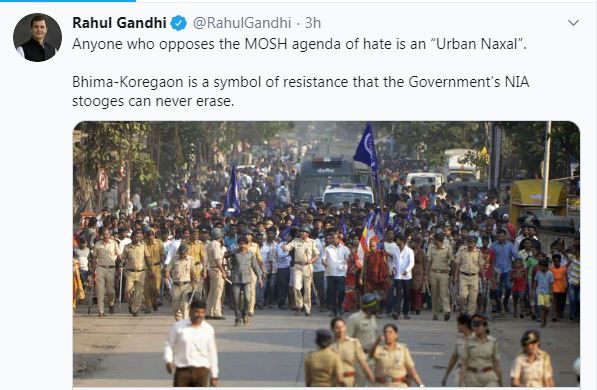 The NIA is currently headed by YC Modi, an officer considered close to PM Modi and HM Shah. The opposition has frequently alleged that the handing over of a case to the agency is done to hide the truth from people. The handing of the recent Davinder Singh case to the NIA, too, had raised eyebrows.

In recent days, a series of statements have been made by leaders of Maharashtra’s ruling Maha Vikas Aghadi (MVA) government, which seemed to indicate that the government was going to withdraw cases against the activists.

The transfer of case to the NIA has upset the Maharashtra government, with the state Home Minister condemning the Centre’s action as being against the Constitution.