The Bharatiya Janata Party is set to register a massive victory in the Gujarat Assembly elections 2017, said the exit polls conducted by news channel News24 with Today's Chanakya.

New Delhi, Dec 14: The Bharatiya Janata Party is set to register a massive victory in the Gujarat Assembly elections 2017, said the exit polls conducted by news channel News24 with Today’s Chanakya. The exit poll on Gujarat polls gave the BJP a huge margin over the Congress, giving it 135 (+/-11) seats. The exit poll said that the Congress will get 47 (+/-11) seats while Others were at 0 (+/-3). Voting for the two phases of Gujarat polls was held on December 9 and 14. Counting of votes will take place on Monday, December 18. (Live updates on exit poll results for Gujarat and Himachal Pradesh Assembly Elections 2017) Also Read - Tamil Nadu Election 2021: DMK-Congress Finalise Seat-sharing Pact. Congress Given 25 Seats, to Fight Kanyakumari By-poll

The exit poll says the BJP is seen getting 49 per cent (+/-3) vote share in Gujarat while the Congress may get 38 per cent (+/-3). Here’s a break down of Today’s Chanakya Exit Poll Results: Also Read - Congress Releases First List of 13 Candidates For West Bengal Assembly Elections | Full List Here

Gujarat recorded 68 per cent voter turnout in the first phase, when voting was held in 19 districts. The second phase was held today in 14 districts where 68-70 per cent voting has been recorded according to reports, which means the overall voter turnout was lower than the 2012 Gujarat elections. (Here is what another exit poll says about Gujarat elections) Also Read - BJP Candidates List For West Bengal Assembly Elections 2021 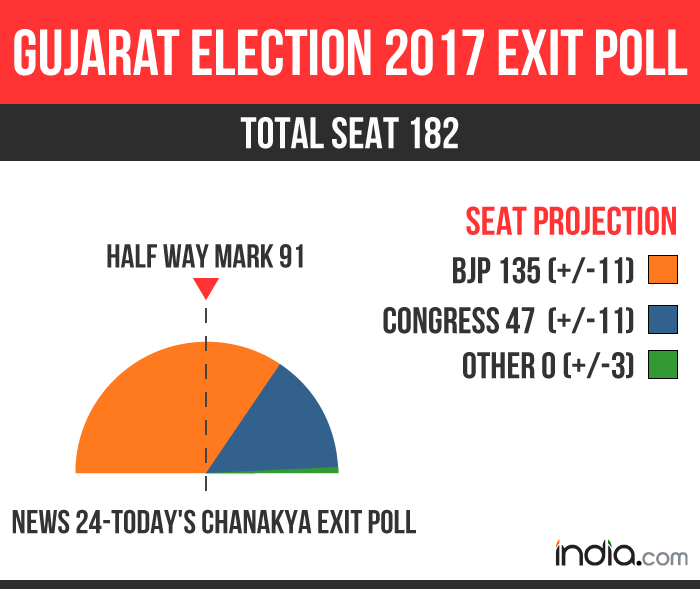 The exit poll says the Patel factor hasn’t helped the Congress even as it shows the Muslim votes going in favour of the Congress.

On Thursday, the voters who cast their votes in the second phase included Prime Minister Narendra Modi, his mother Heeraben BJP President Amit Shah, Patidar leader Hardik Patel and his parents, Finance Minister Arun Jaitley among others. (Another exit poll for Gujarat)

The high-pitch battle for Gujarat Assembly elections this year witnessed multiple rallies by Prime Minister Narendra Modi and Congress President-elect Rahul Gandhi. While the BJP has claimed that it would win over 150 out of 182 seats up for grabs in the Gujarat polls, the Congress has said a surprise is not ruled out. (An exit poll projects a neck and neck battle between BJP, Congress. Read more here)

While Goods and Services Tax and Demonetisation played big poll factors during campaigning, the Patidar reservation issue with PAAS leader Hardik Patel at the centre of polls, has been the highlight this election season.