Top 3 reasons for floods in Bihar

Since 1979, floods have affected Bihar in every consecutive year. 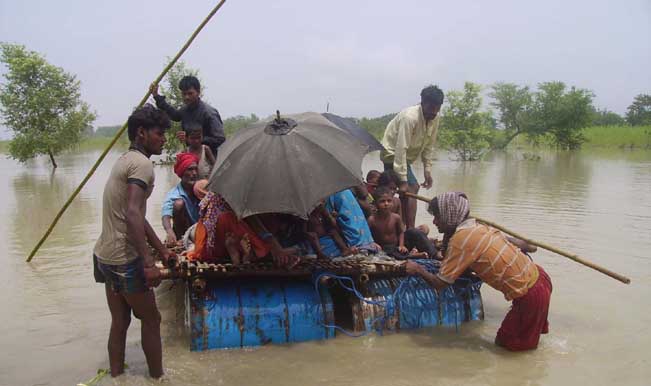 Heavy rains have affected worse in Northern states of Uttarakhand, Bihar, Uttar Pradesh, and in both Assam and neighbouring state of Arunachal Pradesh. North Bihar is a consists of eight major rivers Ghaghra, Gandak, Budhi Gandak, Bagmati, Kamala, Bhutahi Balan, Kosi, Mahananda, all these rivers end up in Ganges. Since 1979, floods have affected Bihar in every consecutive year. Also Read - Assam Rifles Jawan Killed in Ambush by Militants in Arunachal Pradesh

Nepal is a mountainous region. When heavy rains occur, the water flows into the major drainages of Narayani, Bagmati, and Koshi rivers and these rivers cross into India they flow into the plains and lowlands of Bihar and break their banks. To protect the Koshi River dam as well as the Koshi Barrage Pool’s embankments, Indian engineers who are in charge of the dam in Nepal, further open the dam’s gates which can cause flooding down river in Bihar.

In 1954, Bihar had approximately 160 km of embankments and the flood-prone area in the state was estimated to be 2.5 million hectares. Then Bihar flood policy was first introduced to construct the system of embankments, 3,465 km and was administered by the Water Resources Department (WRD). However, the amount of flood-prone land increased to 6.89 million hectares by 2004.

Civil society organization by various experts like Dr. Sudhir Sharma, Dr. Dinesh Kumar Mishra, and Gopal Krishna prepared fact finding report titled Kosi Deluge: The Worst is Still to Come, for the Kosi floods of 2008, highlighted that there are over 3000 km of embankments in Bihar over the last few decades, the flooding propensity has increased by 2.5 times during the same time period, and that embankments failed during each major flooding event.

In 2008 during a high flow episode a breach in the East Koshi afflux embankment above the dam occurred and the Koshi River, known for centuries as the Sorrow of Bihar, picked up an old channel it had abandoned over 100 years previously near the border with Nepal and India. Approximately 2.7 million people were affected as the river broke its embankment at Kusaha in Nepal, submerging several districts of Nepal and India. 95% of the Koshi’s total flowed through the new course.

Deforestation in the catchment area has led to increase in the silt content of the river flow. The major catchment area is in Kosi, excluding the catchment areas of its two important tributaries, the Kamla and the Bagmati. These tributaries of the Kosi are important in them and are generally dealt with separately. Out of the total catchment of the Kosi, only small chunk of area are located in India and the major lie in Nepal and Tibet. The average rainfall in the upper catchment of the Kosi is 1,589 mm while in the lower areas it is 1,323 mm. The average annual silt load of the river is 92,400 acre feet (114,000,000 m3).

The period has caused serious interception in the energetic balance of the river hindering the natural fluctuation of the river within its meandering belt and it is of 10km wide. Farakka Barrage is a barrage across the Ganges River. The water level rose about 8 m upstream of the Farakka barrage. The river which flowed in a South Easterly course between Rajmahal and Farakka during early decades of this century has now formed a mighty meander loop concentration to accommodate the additional discharge accumulated due to the barrage. Due to the obstruction caused by the Barrage each year nearly 640 million tons of silt is accumulated in the riverbed. In the last three decades this has resulted in the accumulation of nearly 18.56 billion tons of silt.