Vandalism was also reported from ITO where the Police Headquarters are situated.

New Delhi: Farmers tractor rally against the Centre’s three contentious agricultural laws turned violent after protesters entered Red Fort and wave their flags from the ramparts on Tuesday. Chaos and ruckus were reported from various parts of the border areas of Delhi as the protesters entered the capital city defying agreement of the scheduled time for the tractor rally.Also Read - Samyukt Kisan Morcha Likely To Meet In Delhi Tomorrow To Re-Start Farmers’ Protests: Report 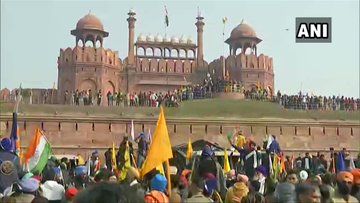 The police had to resort to tear gas shells firing and mild lathi-charge to contain the situation. However, within the hour it was the farmers running the show, with tractors menacingly running at crazy speed towards police platoons, who were forced to take cover.

#WATCH Protestors enter Red Fort in Delhi, wave flags from the ramparts of the fort pic.twitter.com/4dgvG1iHZo

Meanwhile, the Delhi Metro Rail Corporation (DMRC) has closed the entry and exit gates of various metro stations on the yellow, green, violet and blue lines.

These stations are on the yellow line.

Besides this, entry and exit gates of all stations on green line have been shuttered. Violet line’s Lal Quila metro station and Blue line’s Indraprastha metro station were also shut.