Tractor Rally Violence: The FIRs include attempt to murder charge even as two farmer unions on Wednesday said they are withdrawing from the protests against the farm laws.

The FIR alleges that the protesters knowingly changed the timing of their rally and changed their route to disrupt the Republic Day parade at Rajpath. Avik Saha, Jai Kisan Aandolan, Satnam Singh Pannu, Boota Singh Burjgil and Joginder Singh Ugraha have also been named in the FIR. The case against them was registered under various sections of Indian Penal Code including 147, 148 (related to rioting), 120B (criminal conspiracy) and 307 (attempt to murder). Also Read - PM Modi Wears Unique Uttarakhand Traditional Cap Embellished with Brahmakamal Brooch, Here's All About His R-Day Attire

Meanwhile, the Delhi police commissioner S N Srivastava said that a total of 19 people have been arrested while 50 people were detained for questioning. Addressing a media briefing, Srivastava alleged that some farmer leaders like Satnam Singh Pannu, Darshan Pal and Buta Singh gave inflammatory speeches and warned that no culprit will be spared. Also Read - Republic Day Traffic Advisory: Check Parade Route And Roads to Avoid in Delhi

25 criminal cases have been registered so far while 394 personnel of the Delhi police were injured and 30 police vehicles damaged, added Srivastava. 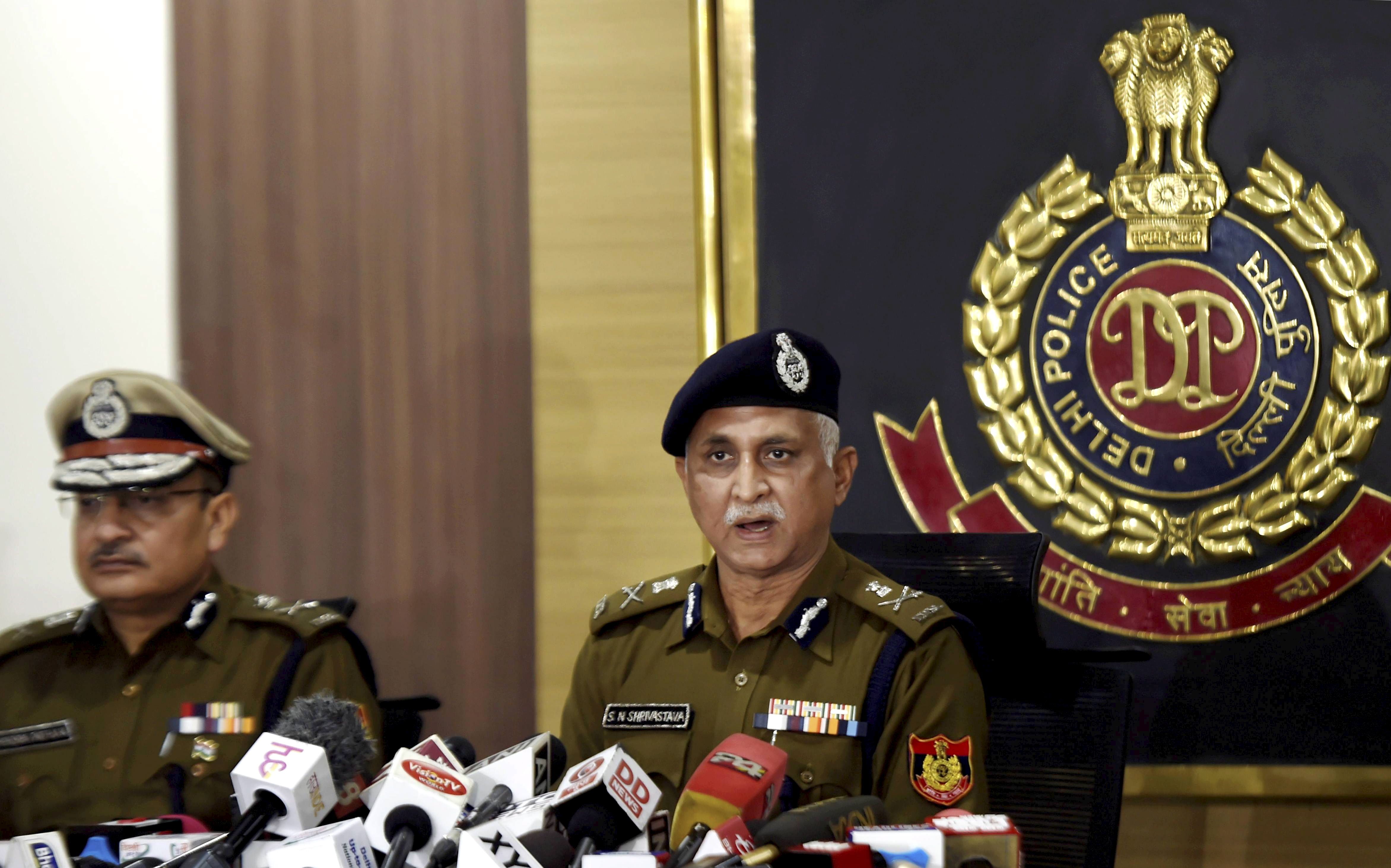 He said the farmer unions did not follow the conditions set for the tractor rally that was supposed to be held from 12 noon to 5 PM and accused them of betrayal. The condition of a maximum of 5,000 tractors in the march was also not followed by the protesting unions, he added.

It mentions multiple IPC sections, including 307 (attempt to murder), 147 (rioting) and 353 (assault/criminal force to deter public servant from discharge of his duty) and 120B (criminal conspiracy).

In one of the FIRs, a Delhi Police cop claimed that some protesters tried to kill him by riding a tractor on the barricades.

Srivastava said not a single life was lost as the Delhi Police showed extreme restraint, adding that the farmer leaders will be questioned in connection with the violence. 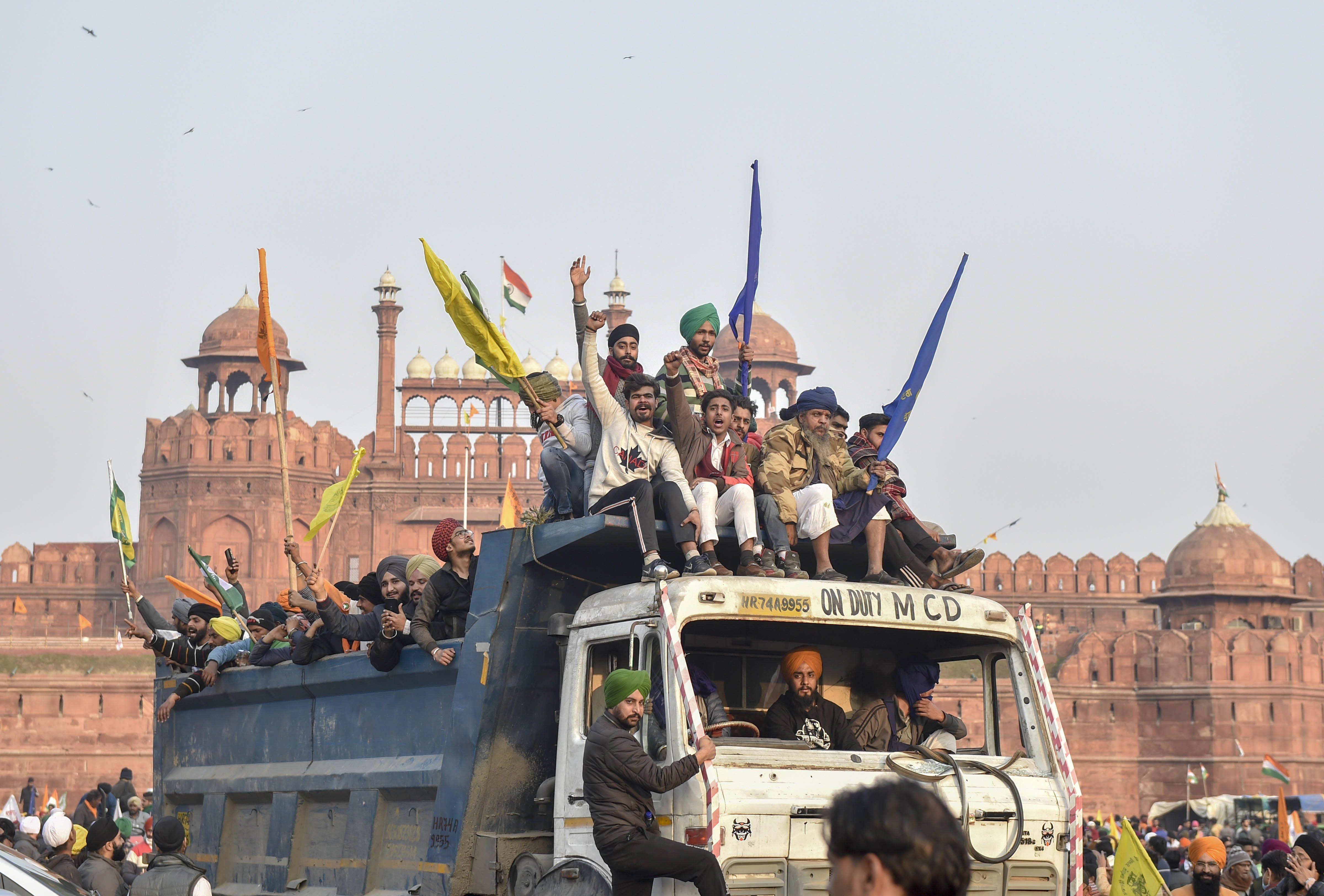 “Police had many options, but remained calm. We dealt with the situation in a proper way that is why no one was killed due to police action during tractor rally violence.” One protester was killed after a tractor over turned.

A police official said the violence will be investigated by a joint team of crime branch, special cell, district units of Delhi Police.

The violence which has evoked all-round condemnation had an immediate fallout among the protesters with the Bharatiya Kisan Union (Bhanu) and All India Kisan Sangharsh Coordination Committee(AIKSCC) withdrawing from the two-month-long protests at the Delhi’s borders. The two bodies are small outfits in the 41-member grouping of farmer unions who are demanding a repeal of the three contentious farm laws.

The leaders of the main farmer unions alleged there was a conspiracy behind the violence and demanded a probe as they continued to allege that “anti-social” elements had perpetrated the violence to “torpedo” their peaceful agitation. 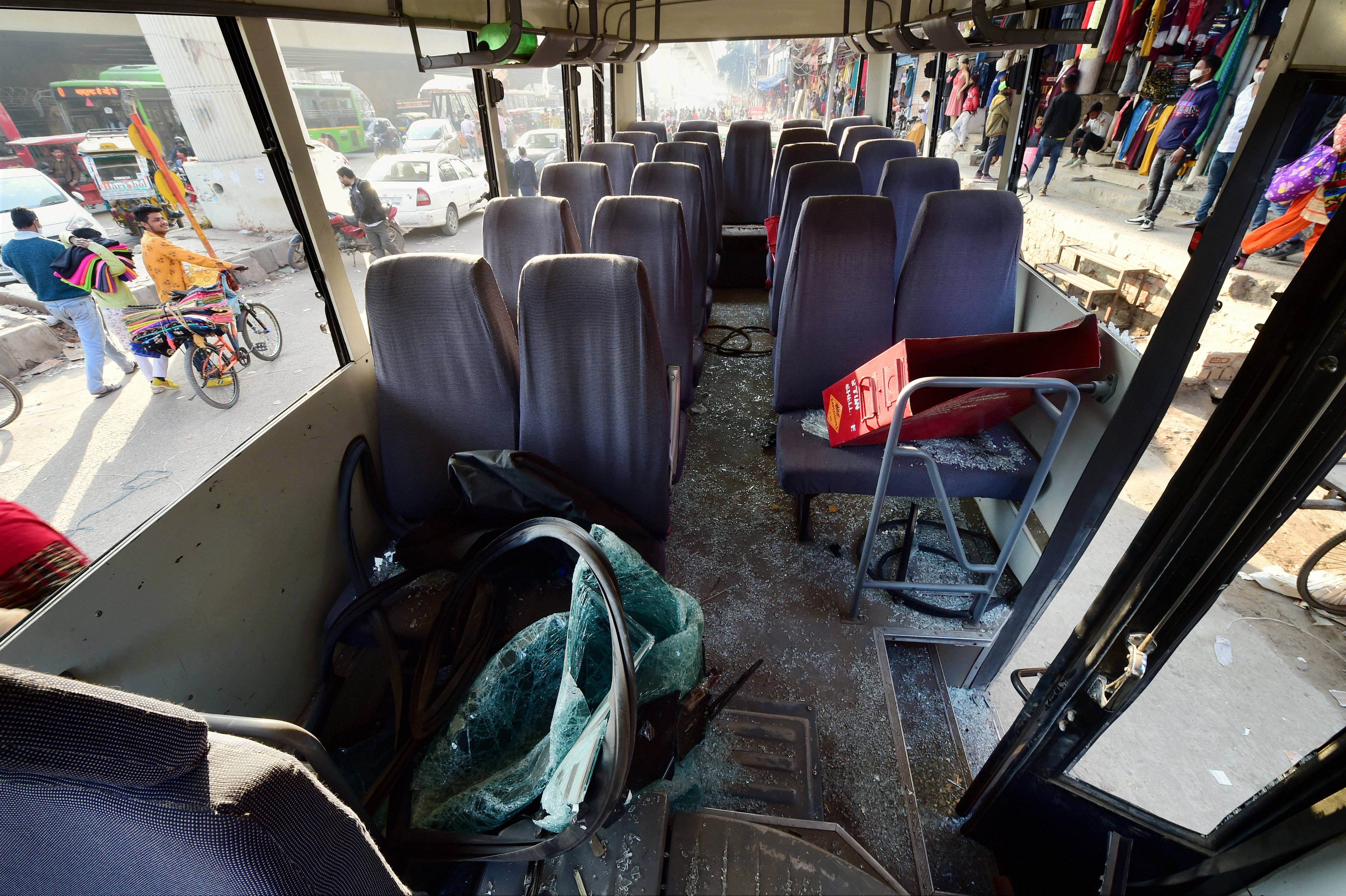 As cracks began to appear in their ongoing stir, the farmer unions cancelled their planned march to Parliament on February 1–the day when the General Budget is due to be presented.

However, they said their agitation against the farm laws will continue and public meetings and hunger strikes will be held across the country on January 30.

“The tractor parade was hit by a government conspiracy. Deep Sidhu is an RSS man. Police let him go after he hoisted a religious flag at Red Fort,” Darshan Pal alleged at a press conference.

Sidhu is a former aide of actor and BJP MP Sunny Deol. Deol had distanced himself from Sidhu in December after he supported the farmers’ agitation.

Another farmer leader Balbir Singh Rajewal claimed that over two lakh tractors and lakhs of people participated in Tuesday’s parade and “99.9 percent of the protesters were peaceful”.

Swaraj India leader Yogendra Yadav, who has been supporting the farmers’ agitation, said, “We regret the Red Fort incident and accept its moral responsibility. The incident should be probed. There is a conspiracy behind it”.

Responding to a question on farmer leaders being named in FIR, Yadav said, “FIR, jail and torture are rewards of movements”.

“We have video clippings and we will expose how a conspiracy was hatched to defame our movement,” said another leader Shivkumar Kakka.

The tractor parade on Republic Day that was to highlight the demands of the farmer unions descended into anarchy on the streets of the city as tens of thousands of protesters broke through barriers, fought with police, and overturned vehicles.

Union Culture and Tourism Minister Prahlad Patel visited the Red Fort to take stock of the damage caused by a section of farmers who stormed the monument and hoisted the Nishan Sahib, the Sikh religious flag, there after deviating from the rally route. The minister has sought a report on the incident. 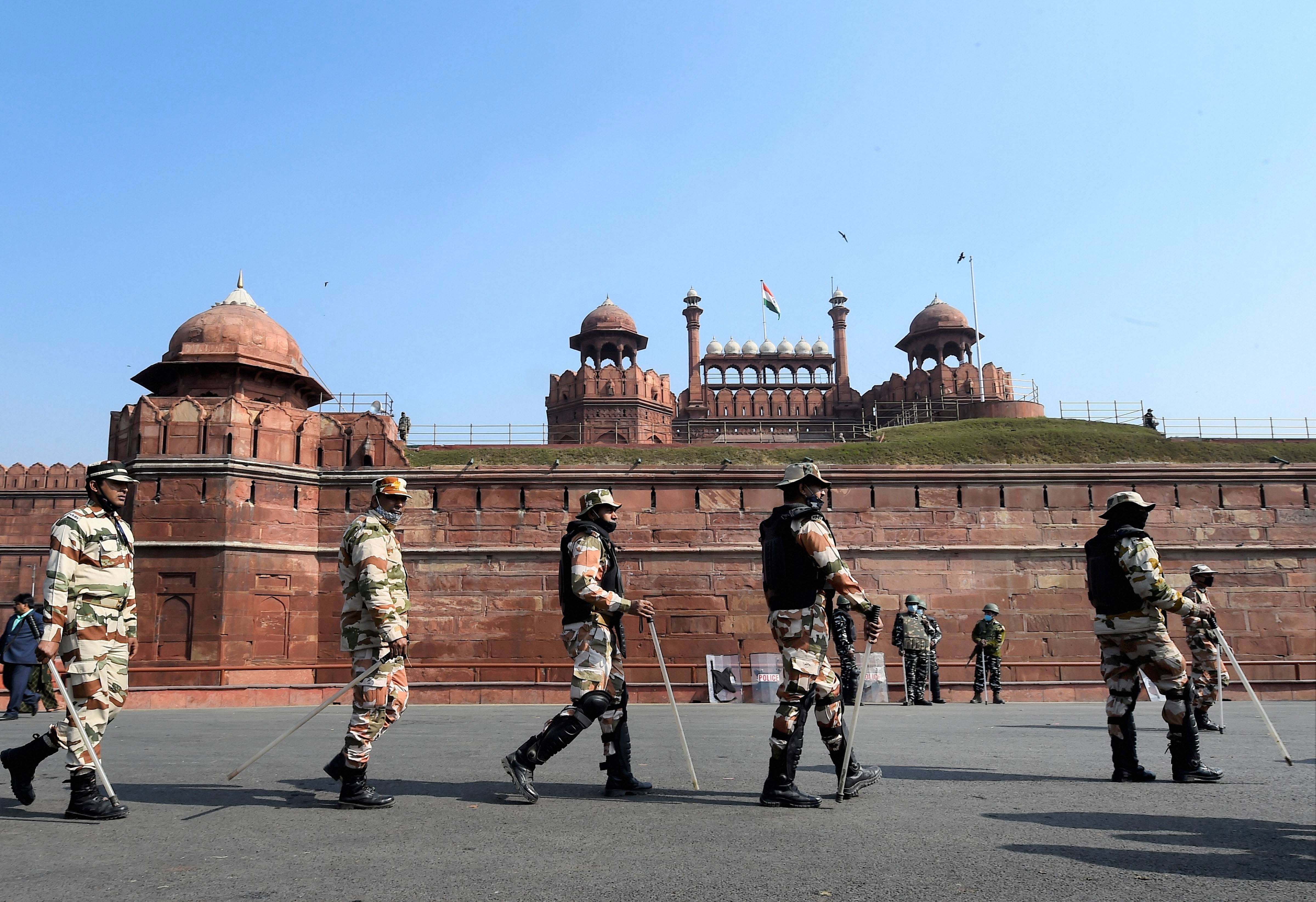 Security tightened at Red Fort, a day after it was stormed by protesting farmers during their tractor march, in New Delhi, Wednesday, Jan 27, 2021. (PTI Photo)

Security was beefed up at several places across the national capital, especially at the Red Fort and farmer protest sites, with the deployment of additional paramilitary forces.

In a statement, the farmers’ body Samyukta Kisan Morcha alleged, The Union government has been severely shaken by this peasant agitation. Therefore, a dirty conspiracy was hatched with Kisan Mazdoor Sangharsh Committee and others.”

Talking to reporters, Bharatiya Kisan Union (Bhanu) president Thakur Bhanu Pratap Singh said he was deeply pained by whatever happened during the tractor parade in the national capital, adding that his union was ending its protest.

The union was staging the protest at the Chilla border, an area between Delhi and NOIDA in Uttar Pradesh.

VM Singh of All India Kisan Sangharsh Coordination Committee said it is withdrawing from the ongoing agitation as they cannot carry forward a protest with someone “whose direction is something else”.

As Tuesday’s events generated political heat, the BJP accused the Congress of inciting the violence and claimed that those who have lost in elections are working to vitiate the atmosphere in the country.

Senior BJP leader and Union minister Prakash Javadekar told reporters that India will not tolerate its flag’s insult at Red Fort and alleged that the Congress has always worked to incite farmers during the ongoing agitation. 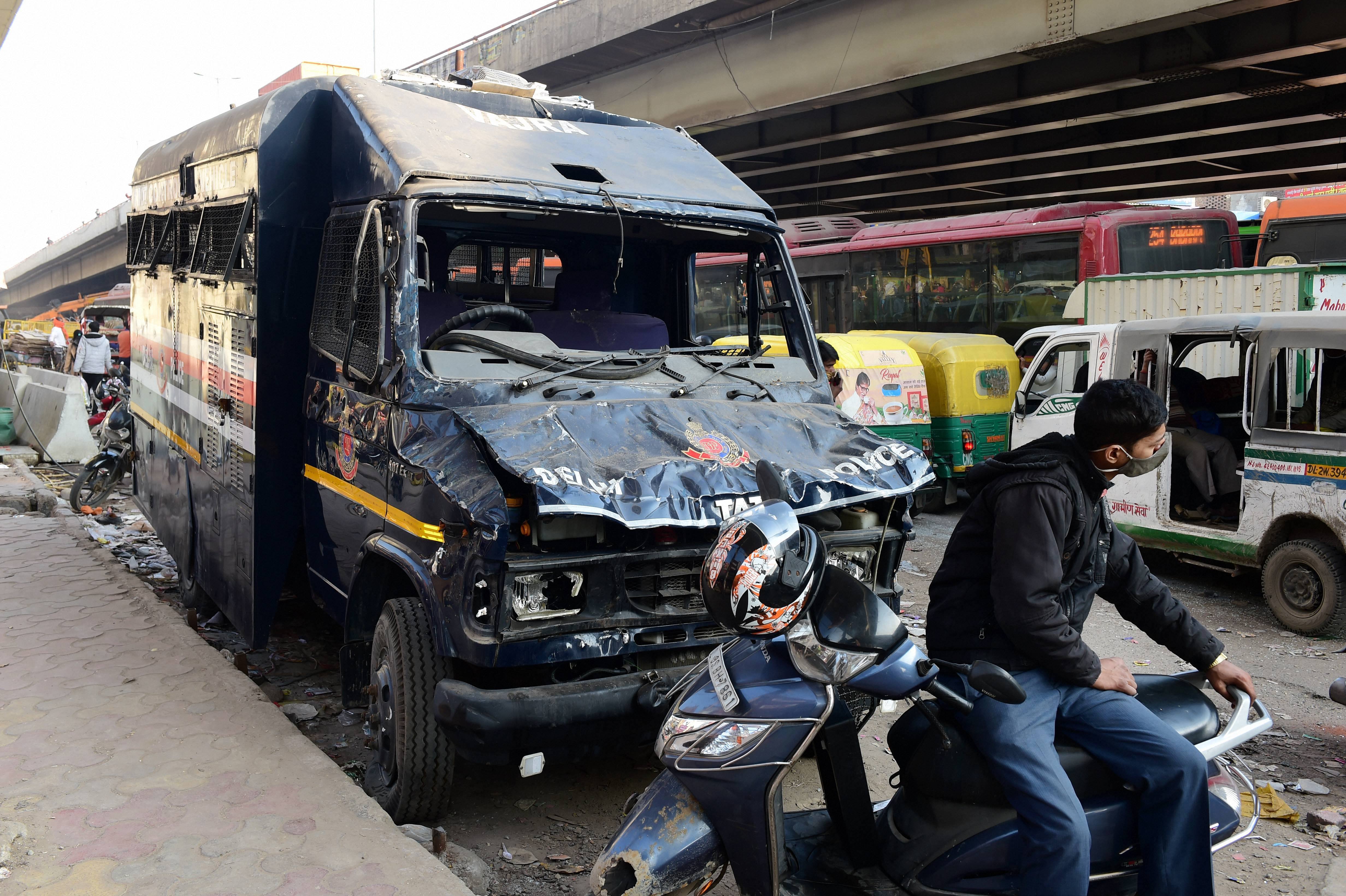 The Congress on its part held Home Minister Amit Shah responsible for the violence and demanded that he be sacked immediately while the Delhi’s ruling party Aam Aadmi Party(AAP)alleged that the BJP planted its “stooge” actor Deep Sidhu to create “chaos” in the’ tractor parade.

At a news conference, Congress Chief Spokesperson Randeep Surjewala also accused the Modi government of being part of a “concerted conspiracy” to malign the farmers’ agitation by allowing some miscreants to enter the Red Fort complex and hoist their flag.

The police in Haryana’s Palwal district also registered an FIR against 2,000 unidentified protesters for trying to break barricades to forcibly enter the national capital and driving dangerously, among other charges, officials said.

Around 50 protesters have been booked under Section 307 (attempt to murder) of the IPC as they drove tractors dangerously, endangering lives of Palwal police chief Deepak Gahlawat and other officials who were on duty, they said.

Meanwhile, two pleas were filed in the Supreme Court over the tractor rally violence with one seeking setting up of a commission, headed by a retired apex court judge, to inquire into the incident while the other urged it to direct the media not to declare farmers as “terrorist” without any evidence.