28 people have been killed and over 200 injured in the deadliest riots to have hit the national capital in decades. NSA Ajit Doval has been given the responsibility to restore law and order in the city.

New Delhi: The United Nations (UN) has taken note of the ongoing communal riots in Delhi and the Secretary-General Antonio Guterres has urged maximum restraint, calling for violence to be avoided, his spokesperson Stephen Dujarric has said. Also Read - Delhi Violence: Judge Hearing The Case Transferred to Punjab And Haryana High Court

28 people have been killed and over 200 injured in the deadliest riots to have hit the national capital in decades. What began as a clash between pro- and anti-Citizenship Amendment Act (CAA) groups on Sunday, escalated into communal riots on Monday and continued a day later as well. Also Read - Delhi Violence Highlights: AAP Leader Tahir Hussain Booked For Murder of IB Staffer; Death Toll Rises to 38

Speaking to media, the UN Secretary-General’s spokesperson said, “Secretary-General is very saddened by the reports of casualties following the protests in Delhi. As he has done in similar circumstances, he calls for maximum restraint and for violence to be avoided.” Also Read - Four 'Hate Speeches' of BJP Leaders Rolled in Delhi High Court 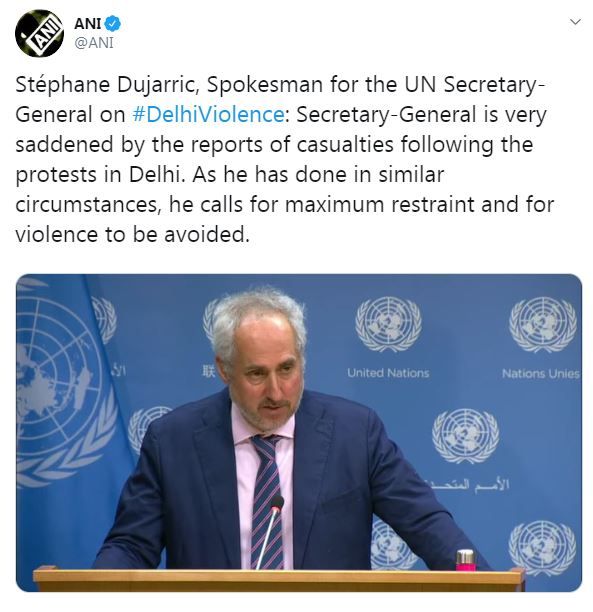 Speaking publically for the first time on the clashes, Prime Minister Narendra Modi on Wednesday, in a tweet, remarked that ‘peace and harmony are central to our ethos‘ and urged people to maintain peace and brotherhood at all times.

National Security Advisor (NSA) Ajit Doval has been given the responsibility to restore law and order in the national capital. In a major relief to the security forces, there was no report of violence from any of the riot-affected areas for almost the entire day; however, there were reports of fresh arson and rioting late night.