According to official sources, further tests were being carried out to ascertain the kind of poison that caused the death.

Unnao (Uttar Pradesh): The preliminary post-mortem report on Thursday of the two Dalit girls who were found dead in their field on Wednesday night in Unnao of Uttar Pradesh, has confirmed “death due to poisoning”. According to official sources, further tests were being carried out to ascertain the kind of poison that caused the death. Meanwhile, the third girl, who is undergoing treatment at the Regency Hospital in Kanpur, continues to remain critical. Also Read - Unnao Case: Survivor Says She was Poisoned, Denies Sexual Assault Attempt While Recording Statement

Giving further details, District Magistrate Unnao, Ravindra Kumar, has sent a letter to the private hospital informing that the entire cost of the girl’s treatment would be borne by the Uttar Pradesh Chief Minister’s Relief Fund. Also Read - Unnao: Murder Case Lodged, Cremation of 2 Dalit Girls to be Held Today

Activists of the Bhim Army had for sometime gheraoed the hospital demanding that the girl be shifted to Delhi for advanced treatment. They were later dispersed but police presence has now been increased at the hospital. Also Read - Bizarre! Doctors Find Sewing Needles, Nails & Screwdriver in UP Teen's Stomach, Removed Through Surgery 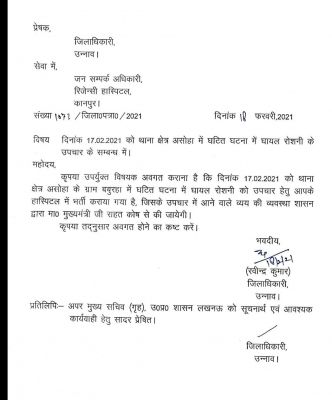 Sources said that local villagers staged a dharna in the village where the incident took place as a protest but were sent back by the police. Barricades have been set up near the houses of the victims and no one is being allowed to meet the bereaved families.