The release of the reservation list made all the confusion go away, with many new faces coming up although it meant shattering the dreams of many candidates.

UP Azamgarh Gram Panchayat Election 2021 Reservation List: The Uttar Pradesh administration on Wednesday released the reservation list (Chunav Aarakshan) for the much-awaited UP Gram Panchayat election 2021. The release of the reservation list made all the confusion go away, with many new faces coming up although it meant shattering the dreams of many candidates. The list was finalized by the Panchayati Raj Department yesterday, after which reservation was allotted in all the gram panchayats of the district. Alongside, a block-wise list of reservations was also released.Also Read - Muslim Family Play Hosts, Offer Their Home For Hindu Girl’s Wedding In Uttar Pradesh's Azamgarh 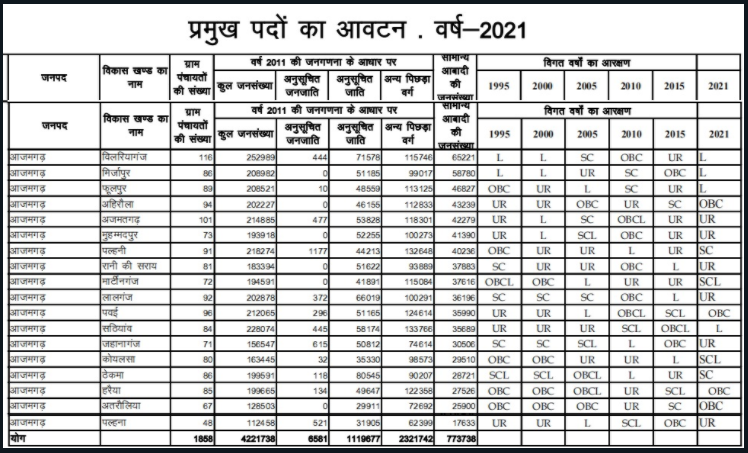 At Block level, a total of 5 seats have been reserved for the scheduled caste, six for other backward caste and four seats are reserved for women. At the same time, 22 seats of the District Panchayat members are reserved for Scheduled Castes, 22 Backward Castes and 12 Women. Also Read - Akhilesh Yadav Resigns From Azamgarh Lok Sabha Seat, to Battle it Out in Uttar Pradesh

There are a total of 1858 panchayat districts in Azamgarh with a total of 42,21,738 individuals, according to the 2015 census. Also Read - 4 Dead, Over 40 Hospitalised After Drinking 'Countrymade Liquor' in Uttar Pradesh's Azamgarh