The statement was released a day after President Trump left for the US after completing his maiden two-day state visit to India.

New Delhi: India and the US on Wednesday released a joint statement a day after US President Donald Trump, on Tuesday, finished his two-day maiden state visit to India. The statement is titled ‘Joint Statement: Vision and Principles for the United States-India Comprehensive Global Strategic Partnership.’ Also Read - 'Great Learning Experience,' Says US President Trump as he Concludes His Two-Day India Tour 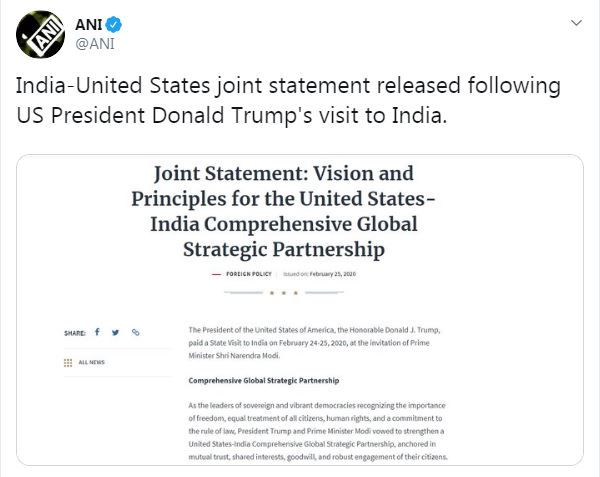 “PM Narendra Modi and US President called on Pakistan to ensure no territory under its control is used to launch terrorist attacks and to expeditiously bring to justice perpetrators of such attacks, including 26/11Mumbai and Pathankot attacks,” the statement read. Also Read - Hope India Takes Right Decision on Religious Freedom, Says President Trump | Key Points

It further stated that both leaders were committed to working together to strengthen and reform the United Nations (UN) and other international organisations, as well as to ensure their integrity. “President Trump reaffirmed the US’ support for India to get a permanent seat in a reformed UN Security Council (UNSC),” it said.

The President, the statement stated, also expressed the US’ support for India’s entry into the Nuclear Suppliers’ Group (NSG) ‘without any delay.’

President Trump arrived in India on Monday for the two-day state visit, landing directly in Ahmedabad, where he inaugurated the Motera Stadium, which is now the world’s largest cricket stadium with a capacity of 1.1 lakh. Later in the day, he visited the Taj Mahal in Agra and finally landed in Delhi.

On Tuesday, the second and final day of the visit, he held bilateral talks with PM Modi, addressed a press conference and finally attended a state banquet before departing for the US.