The historic agreement would see the US withdraw its troops from Afghanistan within 14 months, nearly 18 years after they were deployed there in the aftermath of the 9/11 attacks in New York.

New Delhi: The Ministry of External Affairs (MEA) on Saturday reacted to the historic peace deal signed between the US and Afghanistan, saying that India’s consistent policy is that ‘we support all opportunities that can bring peace, security and stability in Afghanistan.’Also Read - US-Taliban Sign Peace Deal: American Forces to be Withdrawn From Afghanistan Within 14 Months

The deal, signed after two long years of talks, would see the US withdraw its forces from Afghanistan in 14 months, nearly 18 years after they were deployed there in the aftermath of the 9/11 attacks in New York.

In a statement, the MEA said, “India’s consistent policy is to support all opportunities that can bring peace, security, and stability in Afghanistan.”

The ministry further noted that ‘the entire political spectrum in Afghanistan, including the government the democratic polity and civil society, has welcomed the opportunity and hope for peace and stability generated by these agreements.’ 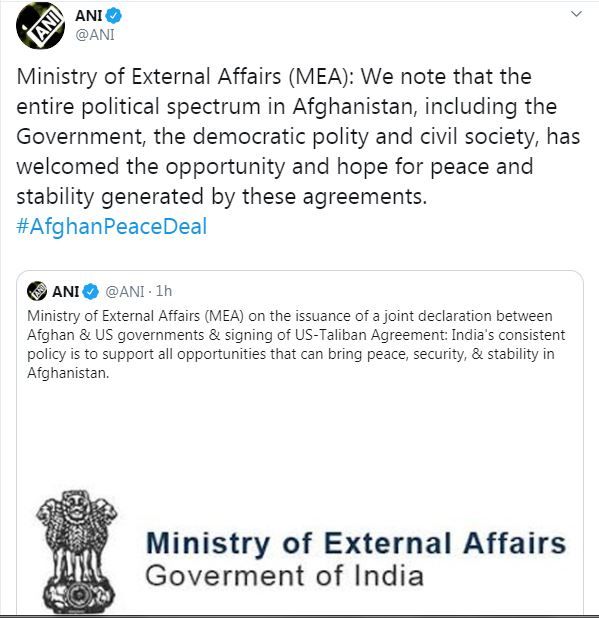 “As a close neighbour, India will continue to extend support to the government and people of Afghanistan in realising their aspirations for a peaceful, democratic and prosperous future where the interest of all sections of the Afghan society is protected,” the statement further stated.

The peace deal, signed between the two sides in Qatar’s capital Doha, will also see the US reduce its troop strength in Afghanistan to 8,600 and implement other commitments in the agreement ‘within 135 days of the announcement of this joint declaration and the US-Taliban agreement.’

Over 2,400 American soldiers have lost their lives in Afghanistan since the US started its ‘war against terror’ there in late 2001.