Uttar Pradesh Assembly Election 2017 Dates announced by Election Commission: Get schedule of Polling and Results of UP State elections 2017

The schedule for Uttar Pradesh Assembly Elections 2017 has been announced by the Election Commission of India.

The assembly election will be contested for the 403 seats of the Vidhan Sabha in the state of Uttar Pradesh. Also Read - Faulty Oximeter Made UP Family Believe Their Dead Son Was Alive, Kept Body For 18 Months At Home 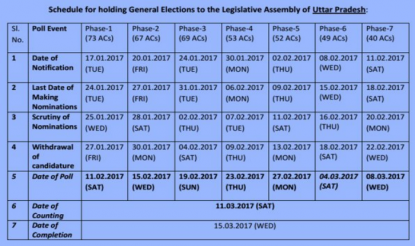 This is all that can be expected in the poll-bound Uttar Pradesh: