The major political parties in fray are BJP, Congress, Samajwadi Party and BSP in the fourth phase which is scheduled for February 23.

Lucknow, Feb 21: Uttar Pradesh is all set to go to fourth phase of Assembly elections 2017 on Thursday. 53 assembly constituencies, spread over 12 districts of Uttar Pradesh- including Congress president Sonia Gandhi’s Rae Bareli, Allahabad, Pratapgarh, Jhansi, Lalitpur, Mahoba, Banda, Hamirpur, Chitrakoot and Fatehpur- will go to polls in the fourth phase on February 23. The campaigning for the same came to a halt at 5 pm on Tuesday.Also Read - Tripura Municipal Election Results 2021: Full List of Winners in Agartala And Other Civic Bodies

The polling for the fourth phase is scheduled to begin at 7 am on Thursday morning while, it will conclude at 5 pm in the evening, states Election Commission guidelines. A total of 1,84,82,166 people will exercise their right to vote on Wednesday. Out of these 10,03,1,093 are males, 84,50,039 are females and 1,034 are third gender. Also Read - Tripura Municipal Election Results 2021 LIVE: BJP Heads For Landslide Victory; Counting Underway Amid Tight Security

The major political parties in fray are BJP, Congress, Samajwadi Party and BSP in the fourth phase. Also Read - 'Delhi Police Cannot do Anything', BJP MP Gautam Gambhir Gets Third Death Threat in a Week 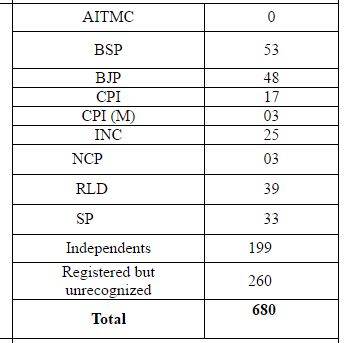 17 constituencies in the fourth phase have more than one women candidate. The largest Assembly constituency is Lalitpur and the smallest is Ayahshah with a population of 4,53,162 and 2,60,439 respectively.

For the smooth conduction of polls, 19,487 polling stations have been setup. Also, 23,924 balloting units and 21,436 control units will be used in the elections.

Seven-phased Assembly elections are underway in Uttar Pradesh. The first three phases concluded peacefully on February 11, 15 and 19. The last phase of polls in the state will be held on March 8 and the counting of votes is scheduled to happen on March 11. (For full election coverage CLICK HERE)