The anticipated metamorphosis of Varanasi, the ancient and spiritual city for Hindus, yet maddeningly chaotic and filthy, into a heritage site is estimated to cost a whopping Rs. 11,800 crore ($2 billion) 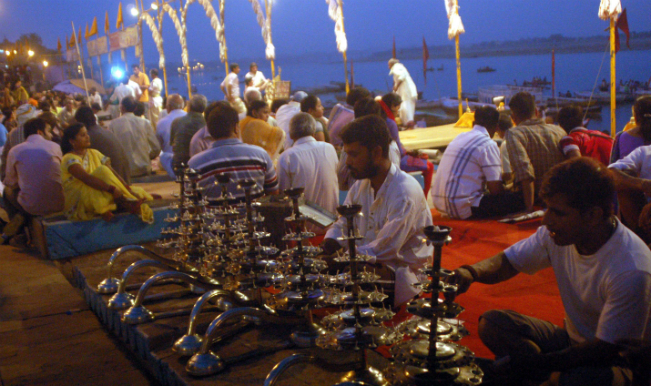 New Delhi, Nov 2: The anticipated metamorphosis of Varanasi, the ancient and spiritual city for Hindus, yet maddeningly chaotic and filthy, into a heritage site is estimated to cost a whopping Rs. 11,800 crore ($2 billion), thanks to the high-level attention being showered on it because it is also now Indian Prime Minister Narendra Modi’s parliamentary constituency. Read- India, Japan sign MoU to develop Varanasi into ‘smart city’ Also Read - UP Horror: 50-year-old Widow Raped in Shahjahanpur

The ambitious plan – to rejuvenate the soul of Varanasi, a city of 1.2 million, through heritage revitalization – envisages cruises on the Ganges, a Bhojpuri film city and an international centre for spiritualism and philosophy, an urban development ministry official told IANS, speaking on condition of anonymity. Also Read - 4 UP Information Officers Demoted to Watchmen & Peon After Their Promotions Were Found Illegal

The official said that the tentative date of the plan’s launch is Dec 25, the birthday of Bharaitya Janata Party stalwart and former prime minister Atal Bihari Vajpayee. Varanasi tops the list of 100 ‘smart cities’ that Modi wants to create by 2019, when the next Lok Sabha elections are due.

In fact, the 63-year-old prime minister wants to develop the temple-town on the lines of ancient Japanese city Kyoto, whose deputy mayor visited Varanasi Thursday. Varanasi elected Modi to parliament in the May general election with a thumping majority.  One of the world’s oldest cities, Varanasi is in bad shape, because of decades of cumulative political and municipal neglect, with filth, garbage and unplanned construction marring its landscape. Also, traffic is in shambles, so much so that stray cows make for dividers on the narrow roads.

Many of the ghats, thronged by tourists – both domestic and foreign – for their spiritual importance, are dirty and unsafe after dark. According to the redevelopment plan, which has already been presented to Modi, of the Rs.11,800 crore, the centre will contribute Rs.2,082 crore and the Uttar Pradesh government Rs.1,488 crore.

The remaining Rs. 8,230 crore will be invested by private and foreign players, the ministry official said. The plan also envisages inter-connected guest houses and connecting tour and transport services with police stations. While the cremation sites alongside the ghats will be modernised, the traditional old structures will be restored. Areas in and around the famed Kashi Vishwanath Temple thronged by thousands of devotees every day will also be modernized.

The proposal also envisages 24-hour water and power supply, broadband connectivity and elevated roads. Schools with e-learning, homes for widows and senior citizens, 100-acre botanical garden and a world class stadium will also come up in the city as per the plan, the official said.

While research centres and academies for music and dance, literature and poetry have been planned, a school of oriental languages has also been proposed. The official said that the cabinet is likely to give its nod to the plan by Dec 15. The plan’s execution can take between five and seven years and the ministry has already made it clear that the onus of developing Varanasi is on the local urban and municipal bodies.

Independent agencies would be roped in to monitor the execution of the projects. The official said the deadline for completing elevated roads, storm water drainage, waste water system, the stadium and the essential cleansing of the river Ganga and its adjoining ghats is September 2019.

Other projects like a Metro rail and satellite townships are likely to be completed by September 2021, the official said.