The Gangetic dolphin was reportedly beaten to death by the locals who mistook it for a 'deadly fish'.

Pratapgarh (UP): A rare Gangetic dolphin was beaten to death in a canal in Uttar Pradesh’s Pratapgarh by three men who used sticks and axes to kill it. The video shows few men surround a rare Gangetic dolphin while three among them beat it with axe and lathis. The hapless dolphin is surrounded and resigns to fate. Men can be seen laughing in the video as dead dolphin’s blood spills in water. The video also shows a few individual requests the blood-thirsty men to not beat the animal to death.Also Read - 'Will Launch Project Dolphin in Another 15 Days', Says Environment Minister Prakash Javadekar

After the video went viral on social media, three men were arrested by police. Police said the incident took place on December 31, 2020 at the Sharda Sahayak canal in Pratapgarh. The dolphin, that is a protected species and strayed into the canal, was reportedly beaten to death by the locals who mistook it for a ‘deadly fish’. Also Read - Fisherman Accidentally Catches Endangered Ganges River Dolphin in Bihar's Purnia, Carries it to Safety

The local police and forest officials had reached the spot and had sent the dolphin’s body for post-mortem. Also Read - HORRIBLE! Bengal Men Torture Gangetic Dolphin to Death on Banks of River Hooghly, Viral Video Sparks Fury on Twitter

However, the matter was kept under wraps until the video clip went viral on January 8 when someone posted the clip of the dolphin being beaten to death by the locals. (India.Com has deliberately avoided the disturbing video) 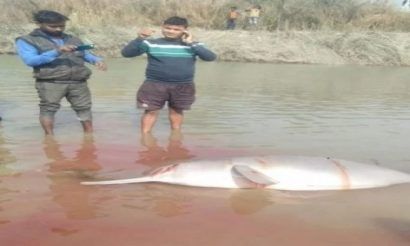 The forest officials evaded comments on the issue and said that it was yet to be verified if it was actually a dolphin.

The local police said the forest officials would be better placed to respond to the queries.

Meanwhile, a local source said the water gate of the canal had been closed and the water level had receded.

“In the morning of the New Year, local people saw the dolphin moving in the water. Some said it was a ‘deadly and poisonous fish’ while others said it could kill people who went near it. A huge crowd collected at the spot and people decided that it would be dangerous to let it go. The crowds started beating the dolphin and some even hit with an axe,” the source said.