PM Security Lapse: India.com has accessed the video wherein the Prime Minister can be seen waiting in his car while protesters blocked his cavalcade and police vehicles in Ferozepur.

New Delhi: Amid ongoing controversy over Prime Minister Narendra Modi’s ‘security lapse’ issue, a video showing the moment when the PM was stuck on a flyover has emerged. India.com has accessed the video wherein the Prime Minister can be seen waiting in his car while protesters blocked his cavalcade and police vehicles on a flyover in Ferozepur. In the 01:14 seconds clip, Punjab cops can be seen roaming and talking casually to protesters when the Prime Minister’s convoy was stranded. For the unversed, PM Modi’s rally in poll-bound Punjab had to be cancelled on Wednesday due to a security lapse after some protesters blocked his route. He was forced to spend about 15-20 minutes on a flyover while was en route to the National Martyrs Memorial at Hussainiwala when the incident happened.

The Prime Minister’s convoy was stuck on a flyover near Piarenna village, which is just 30 km from the India-Pakistan border. As per the government sources, one of the protestors came close to about 150 meters from the PM’s cavalcade.

Take a look at the PM’s route description from Bhisiana airbase to Piareanna. 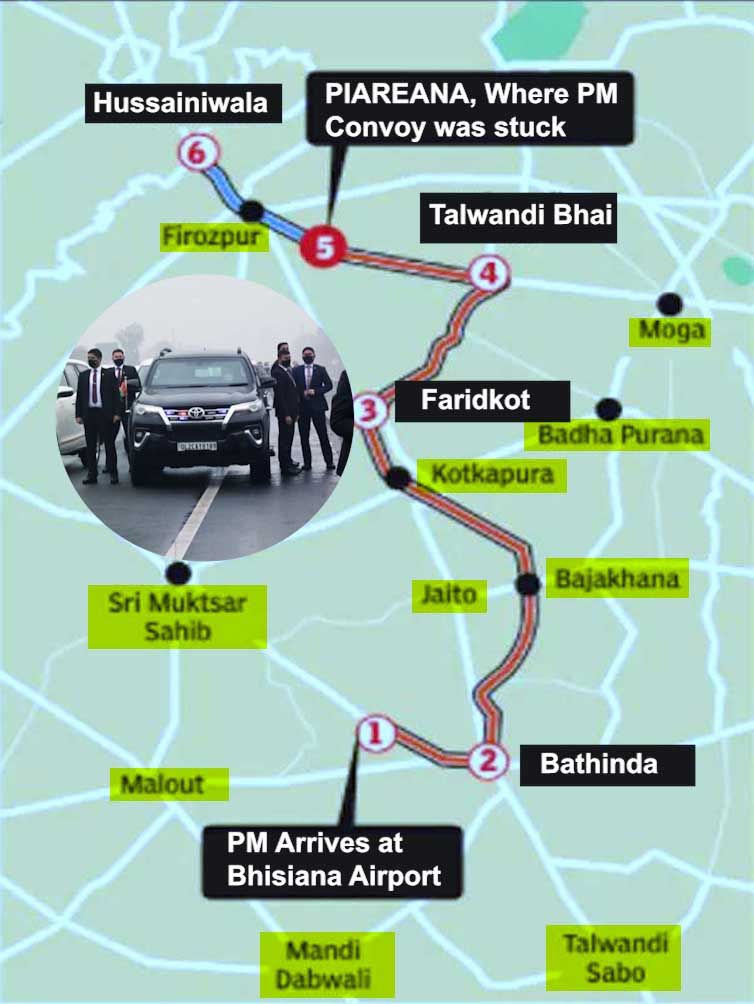 The Special Protection Group (SPG) is involved in PM’s security. SPG’s ‘Blue Book’ lays down security guidelines for the protection of the Prime Minister. The Ministry of Home Affairs (MHA) issues instructions in the ‘Blue Book’.

As per the Blue Book, the state police have to prepare a contingency route for the protectee in case of any adverse situation like the one that happened in Punjab during the PM’s visit. The SPG plans a mandatory Advance Security Liaison (ASL) with everyone involved in securing the event, including central agencies and state police forces, 72 hours prior to the event. At this meeting, officials deliberate upon everything, including the smallest of details. Following the meeting, an ASL report is made on the basis of which all security arrangements are planned.

On the other hand, the Supreme Court has asked the Punjab and Haryana High Court’s top officers to secure and preserve travel records. Notably, the top court was hearing a petition filed by senior advocate and former Additional Solicitor General Maninder Singh who has demanded a thorough probe into the incident.

Earlier in the day, Punjab Chief Secretary Anirudh Tewari submitted a report to the Centre regarding the issue and informed that an FIR has been lodged in the incident and the state government has formed a two-member panel to investigate lapses. Tewari is learnt to have shared details pertaining to the sequence of events that unfolded during the prime minister’s visit on Wednesday, official sources said on Friday.

Centre's three-member panel arrived at Ferozepur-Moga highway to probe the security lapses that led to Prime Minister Narendra Modi’s convoy being stranded on the flyover pic.twitter.com/EmmbTjqbc6

Yesterday, the Punjab government had announced a two-member panel to investigate the lapses. The panel has been asked to submit its report in three days.