Das’ new live comedy show is coming to three cities in the U.S. after completing a massively successful stint in India.

Anyone who has seen “Delhi Belly” or “Go Goa Gone” would surely recognize Vir Das—if not by face, then definitely by his distinct voice and unique penchant for humor. Also Read - Watch: Vir Das on His New Netflix Show 'Outside In', Making Jokes on PM Modi, And Lack of Female Comedians

Das’ new live comedy show, “Unbelievablish,” is coming to three cities in the U.S. after completing a massively successful stint in India—overall, he performed in 17 cities in 40 days, selling a total of 35,000 tickets. It was an unexpected and crazy response, Das said, but one that has him even more excited about this next part of the tour. “Unbelievablish” will begin in New York City, at Caroline’s on Broadway, from November 19 to 22. Also Read - Vir Das Gives an Insight Into his Lockdown Activities- Watch Interview

In this new show, Das brings his signature comedic style to the forefront in an innovative and engaging way. Instead of only performing a monologue, he has formatted the show as a battle between the audience and himself in a giant game of “True or False.” Also Read - 'Freedom of Speech in India is Not Free', Says Comedian-Actor Vir Das After Being Served 13 Legal Notices in 2020

“I tell you stories; some are true, some are false and you have to catch the lie,” Das explained. “So it makes the audience that much more captive and that much more rowdy because they are trying to take me down. The show has this nice battle energy about it for that reason.”

For the comedian and actor, this is a new avenue not only in format but also in terms of what he talks about. Das’ previous stand up work has typically been very thematic. “History of India,” as the title suggests, was about Indian history, while “Battle of the Sexes” was a science and biology based show. In contrast, the concept behind “Unbelievablish” is Das himself. “I realized that in ten years as a professional comedian, I had never written a word about myself,” Das said. “So I decided to write about what scares me and what fascinates me.”

This personal angle, one of telling his own story through the lens of comedy, speaks to the relatability of his experiences and Das’ belief that there’s no one right way to tell a story. “The show doesn’t celebrate my achievements,” Das confessed. “It mostly points out my stupidity and highlights my failures, like my first movie bombing, rejection from women, getting arrested, stealing money, getting laid, getting hitched—all stuff that people can relate to no matter what country they are from.” 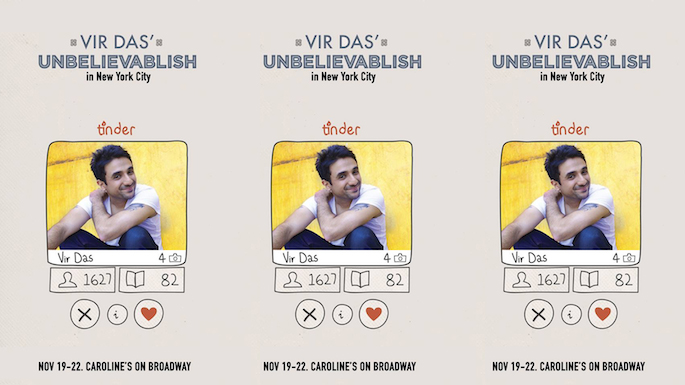 Formally trained as an actor, Das initially considered himself more of just a fan of stand-up comedy. “I used to obsessively listen to George Carlin, Eddie Murphy, and Bill Cosby all through drama school,” Das recalled. Somewhere along the way, however, he thought he might be good at it too—so during his last year of acting school, he wrote a 90-minute show called “Brown Men Can’t Hump.” “It was mostly cussing, and very few jokes,” Das said. “I did it for about 700 people at my college and it went well—since then, I was hooked.”

Along with being a comedian, Das embodies multiple roles, including that of an actor as well as a musician. His jam-packed schedule might have him shooting for a film one week, then spending the weekend touring and gigging—all alongside performances with his rock band twice a month and producing digital content. His many roles often involve a massive amount of multi-tasking. “The main task of the week is knowing that all these very diverse and different audiences exist in India and having to keep them all happy,” he said about the common thread through all his identities. “It’s like I’m cooking five different cuisines in five different kitchens at all times.”

Despite dabbling in so many mediums, however, Das’ current favorite is music—his band is working on a new album, so he spends a lot of time in the studio. “I think they are all extensions of who I am and it changes from day to day,” he explained. “But I think my first love will always be stand-up.”

So what’s next for Das? The U.S. “Unbelievablish” tour is what he described as dipping his toe in the pool to test the water—the next step is a much larger American tour.

In the meantime, the comedian is pretty clear about what his greatest accomplishment thus far is. “Brushing my bulldog’s teeth,” Das admitted. “If you can do that, you can do anything.”