Ever wondered if a 7-yr-old kid could trash existing paralysis in our education system? 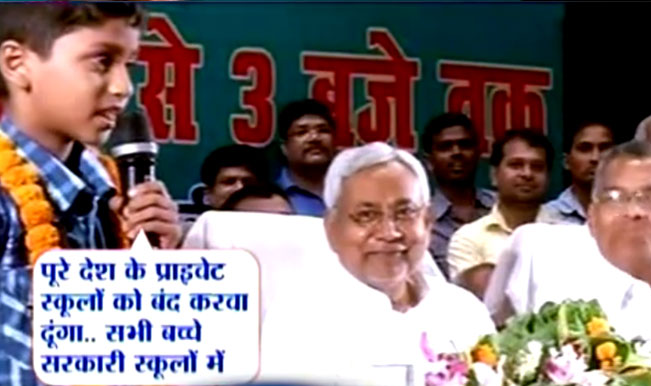 Ever wondered if a seven-year-old kid could trash the existing paralysis in our education system? If not, then this video will surely give you goosebumps seeing a school boy doing the exact same. How bravely did the seven-year boy spelt the truth out in front of Bihar Chief Minister Nitish Kumar. Listening to the eye-opening facts by a small kid, Kumar was visibly speechless! Also Read - After Criticism, Bihar Plans Major Changes In Its Liquor Prohibition Law. Here's What New Law Proposes

This 4-minute-video shows a kid explaining the ills that exist in our laggard education system. How easily the small kid explains his point of the difference between private schools and government schools. The boy delivered the address at a Chaurasia-caste organised function where he was randomly picked among the crowd. (WATCH: Cute Video – A tiny hamster nibbling on a tiny pizza!) Also Read - Bihar Extend Covid Restrictions Till This Date | Check Important Guidelines Here

“There are two types of education in our country, one for poor and one for those rich people who enrol themselves in private schools,” says the kid while beginning his short speech. The way he ends the speech and the expression on Chief Minister Nitish Kumar’s face will make you realize what has been the scenario of education in our country. The kid also said that he aspires to be the Prime Minister of India once he grows up. (WATCH: Cutest Animal Video Ever? This baby Gorilla and Chimpanzee’s bathing clip will make you go aww!)

Watch full video of how a seven-year-old raise questions to which not many have answers.