Ketan Jorawadia was not inside the commercial complex where a blaze claimed lives of 22 people, but when he saw flames coming out, he rushed to rescue as many as possible.

Ketan Jorawadia was not inside the commercial complex where a blaze claimed lives of 22 people, but when he saw flames coming out, he rushed to rescue as many as possible. Also Read - 'Tika Lagao, Beer Le Jao': This Gurgaon Restaurant is Offering Free Beer to People Who Show Their Vaccine Card

Videos of the incident show a man climbing the complex building, trying to pull out people stuck inside- that man is Ketan Jorawadia. He can be seen hanging by the windowpanes on the third floor and trying to reach out to those trapped. Also Read - 'Vaccine Lagwao, Sona Le Jao': Women Get Gold Nose Pins For Taking COVID-19 Vaccine in This Gujarat City!

Surat fire incident was tragic and very painful. But while this was going on, one of the boy who managed to climb down to 3rd floor sledge from window decided to save others. While he was on sledge, around 5 students jumped in front of him.

His name is Ketan Jorwadia.

According to reports, the 23-year-old managed to save the lives of 10 people by his quick thinking. In several disturbing videos doing the round, many people were seen jumping off the multi-storeyed building in a bid to save their lives.

A report in NDTV quoted him saying, “A girl fell to the ground in front of me while trying to escape the blaze. Seeing this, I quickly arranged a ladder and propped it behind the building and helped as many people get to safety.”

Ketan’s show of exemplary courage has earned him praise and love from people all over the country. Commending his act of valor, the IAS Association tweeted, “The #IPSAssociation salutes the indomitable spirit of #KetanChorvadiya who displayed exemplary courage and determination which saved many lives in #SuratFireTragedy.” 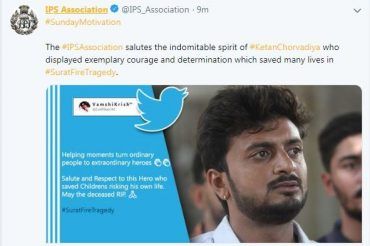 The death toll in the devastating blaze rose to 23 by Saturday, even as seven students battled for survival in hospitals, officials said. Two of the injured students were on ventilator and five admitted to intensive care units (ICU). The condition of four others was reported to be stable.

Most of the students who were killed in the fire were between the age of 14 and 17. Some were expecting their Class 12 results on Saturday.

The fire broke out late afternoon around 4 pm in the Smart Design Studio, which ran illegally on the covered terrace of the Takshashila building that effectively became fourth storey.