There were as many as 80,000 registrations for the event, but only the lucky 20,000 got the ticket as the ticket was distributed in the lottery system. 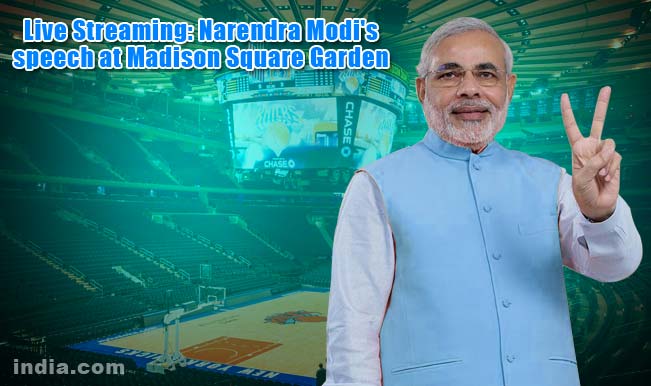 Prime Minister Narendra Modi will address a strong crowd of 20,000 at full house arena at the iconic Madison Square Garden, New York. Narendra Modi will speak at the multi-purpose arena to the members of Indian-American community in the United States. There were as many as 80,000 registrations for the event, but only the lucky 20,000 got the ticket as the ticket was distributed in the lottery system. The speech is expected to begin at 11 am local time; approximately 8:30pm in India. The live streaming of Narendra Modi’s speech can be viewed live here. Also Read - 'Great Leader And Loyal Friend', Trump's Birthday Wish For PM Modi

The live telecast of Narendra Modi’s speech will also be telecast on DD National and several other channels. It will be an awe-struck moment for the audience in United States as the famous Times Square is scheduled to telecast the Modi’s speech live too. You can view the live streaming of his speech here also. Also Read - Happy Birthday Narendra Modi: Kangana Ranaut Prays For Prime Minister’s Long Life in a Video

If Prime Minister Narendra Modi left you high-n-dry in his maiden speech at 69th session of United Nations General Assembly (UNGA) on Saturday, Modi ensured that his 7-minute speech at Central Park would compensate the former. Addressing a youthful crowd at a rock concert that was attending the ‘Global Citizen Festival’, Modi surprised everyone when he delivered his speech in English and not HINDI!

Narendra Modi after delivering a powerful-yet-lacklustre speech at the UNGA delivered an engaging speech to a crowd of thousands and gave the ‘can do’ mantra. Modi said, “As you are the future, the things you will today will decide our tomorrow. Modi ended his speech with a Sanskrit shloka and with folded hands greeted the majorly-American crowd with ‘Namaste’. As a Prime Minister on his maiden US trip, Narendra Modi has already been given red carpet welcome. Add to it the rousing rockstar reception by the public wherever he gone only adds accolades to the once banned former Gujarat chief minister.

Hollywood superstar Hugh Jackman got his share of cake, as he was the one who introduced Narendra Modi to the crowd as person who began being a tea salesman, is now the Prime Minister of India with a huge mandate.

Narendra Modi has already spoken in Hindi, Sanskrit, English, and Hinglish in United States; what he chooses to speak to the audience of Madison Square Garden will be a delight.