Gandhi, who was surrounded by a huge crowd of media personnel, supporters and party workers, danced along to the beats of dhol tapping her feet and swaying her legs along with the dancers.

New Delhi: Congress General Secretary Priyanka Gandhi Vadra, who is in Assam ahead of assembly elections as part of the party campaign, on Monday joined in to do the ‘Jhumur’ dance with a group of young performers of the tea tribes in Lakhimpur. Gandhi, who was surrounded by a huge crowd of media personnel, supporters and party workers, danced along to the beats of dhol tapping her feet and swaying her legs along with the dancers. Also Read - 'Crime Against Humanity': Priyanka Gandhi Accuses Fadnavis of Hoarding Remdesivir Amid Shortage Of The Drug

Gandhi was dressed in a purple saree with a traditional Assamese scarf around her neck as she gave all smiles to the cameras while dancing to the traditional beats, as seen in a video shared on Twitter. Neither the Congress leader nor the teens performing with her were wearing face masks. Also Read - No Plans To Club Remaining West Bengal Poll Phases into One, Says Election Commission

Priyanka Gandhi Vadra is on a two-day visit to Assam to launch the Congress campaign for the three-phased assembly election that begins on March 27.

Clad in a red outfit, the prevalent colour symbolising Shakti, the Congress leader said that she wanted to visit the temple for long and “her wish has come true”. 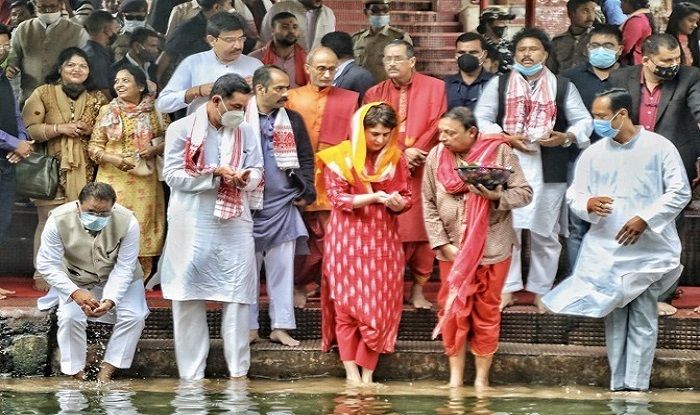 “Today, I got the privilege of seeing the mother Kamakhya. Mother prayed to Kamakhya for the welfare of all the countrymen,” she tweeted in Assamese along with a prayer earlier in the day.